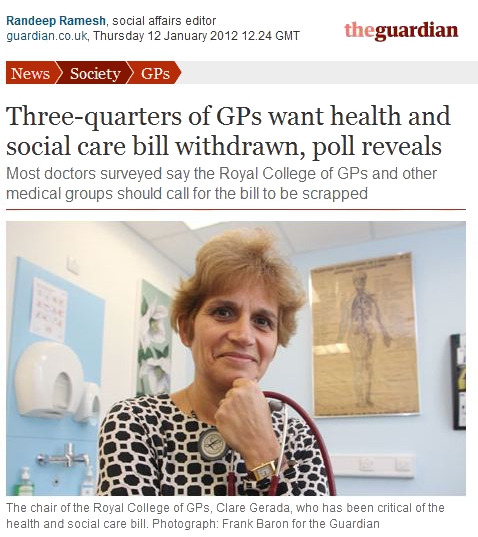 This Guardian story highlights key flaws in research conducted by the Royal College of General Practitioners (RCGP) to gauge GP sentiment towards the coalition governments Health and Social Care Bill.

Whilst the report may highlight that “Nearly three-quarters of family doctors surveyed by the Royal College of General Practitioners want the government to withdraw the coalition’s health and social care bill” even in this main stream news article it’s highlighted that this was a self-selecting survey and only 6% of the organisations members responded to the survey (the RCGP has more than 42,000 members) on something that is of such critical importance to their futures.

Whilst Andy Burnham, the shadow health secretary, is quoted as saying “People will ask how can plans that were meant to be based around GPs can possibly succeed when only two out of a hundred support them” a “source close to Lansley” suggested the research has “little credibility” due to the way the research had been conducted.

In my opinion the RCGP is attempting to highlight the conclusions as seen on the left, when in reality opposition to the research findings (of which I’m not one) could quite feasibly argue that the situation on the right is a much more accurate representation of the response from members that they collected: 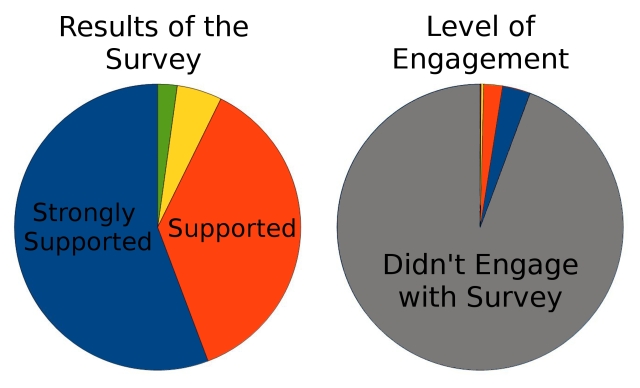 > Imagine how much more powerful this professional group could be if they had a reply from every single GP who will be affected by the reforms (eg. excluding the ~7% of GP’s who participated yet work outside the regions affected)

> Imagine how many GPs have their email read (and possibly ignored?) by their various work colleagues (eg. Nurse, Practice Manager, Secretary etc)?

> Imagine if busy Doctors could engage with the direction of their professional body in a way that was as easy as submitting a vote for a TV popularity contest?

Every single member of the RCGP has a mobile phone. The vast majority have a smartphone. The RCGP is paying attention to mobile (eg. it has a Twitter page with >3500 followers) but for critically important surveys they’re continuing to ignore the newest mass media and failing to listen to and effectively communicate the interests of their members.