“The number of mobile health apps that have been produced to date is prodigious, with about 40,000 available, some media reports reckon. And investment has surged. Last year, about $439 million was invested into 70 deals for healthcare startups that develop mobile health apps along with tools for online social networking, according to a Dow Jones Venture Source report published earlier this year. But as Ted Driscoll, a technology partner with venture capital firm Claremont Creek Ventures sees it, investors interested in the mobile health space could be turned off by companies with products that can’t be protected from would-be copiers. Theoretically, patents are only supposed to be issued if products are unique and different, but it doesn’t always turn out that way. He also talked about a recent investment in a company with an ear exam tool as part of an iPhone app”

In a recent thread in the Linkedin mHealth group Chris Wadsen, Global Healthcare Innovation Leader at PricewaterhouseCoopers, refers to this Gigaom article that I also think is largely missing the mHealth smartphone app opportunity:

“I am very bullish on mHealth given all the research I have done I see mHealth as the most transformational technology in healthcare. But we do have a problem with the quality of apps and that most don’t follow the six principles that dictate success”

A lack of IP is an opportunity

Whether there is a lack of IP or not is of course a difference of opinion but even if there was it doesn’t make for a good reason to not invest. A lack of intellectual property that makes things easier to copy isn’t always a bad thing especially when you appreciate the concerns that Ted himself outlined in a February 2011 interview:

“mHealth is not ‘ready for primetime, mostly because I don’t think our conventional healthcare system is ready or capable of embracing it’”

This ability to copy things is exactly what’s driving major healthcare firms that have taken a “Mobile First” approach to innovation like Kaiser Permanente to roll out engaging mHealth experiences that are setting new benchmarks in rate of adoption by patients.

Similarly the ability to copy things is exactly what’s enabling innovations to go viral and in turn driving the public awareness of the best of breed mHealth tech. A brilliant example of this is the video of Dr Dave Albert’s “fake-as-B***h iPhone ECG” on youtube that I shared here 18 months ago.

Yes there are/were lots of ECG recorder devices on the market before – here’s a post from nearly a year before on my blog showing the Aerotel HeartOne device – but none of them were as well thought out, mobile focused, capable of producing such a high quality clinical output at such a cost, easy to use, carry, and simply downright cool as the Alivecor device.

5 years ago even a very talented entrepreneur would have had to make do with spending years griping (just like Ted Driscoll was doing last year) about how the Healthcare industry was at fault because it resisted any innovation as he hawked his wares around the globe at trade shows and conferences trying to enthuse individuals.

Today because of mobile we can send a SMS or email from in seconds to all of our contacts (in my case that’s a comprehensive who’s who of mHealth) saying “Check out this Low Cost Smartphone Case that’s going to transform Cardiac Monitoring” and in less than a week this incredible invention and it’s inventor are being broadcast live as part of Good Morning America’s primetime CES coverage, within weeks the companies closed $ million of investment (so far the company has received over $10 million in investment), within a year it’s been hit on by nearly every major news channel, the youtube video has had more than 380,000 views (and others have “copied” or embedded it into their own video channels where it’s received many tens of thousands more views), within a year the device – which is still to be made available for sale – has been used to save the lives of patients 20k ft up in Jet Aeroplanes as it has on the ground here 5000km away in rural Ireland, showcased as part of Qualcomm’s Paul Jacobs opening keynote presentation at the 2012 CES (the biggest ever convention to take place in Las Vegas) and it’s even led to the launch of the world’s first mHealth games franchise at one of the world’s top Medical Schools.

18 months later it’s hard to find a billionaire in Silicon Valley who hasn’t got an Alivecor ECG case but if you still think the idea of sharing or copying is a bad thing watch Dr Albert’s TedXOKC video and then please get in touch as I have no idea how any of this could of happened even 3 years ago:

Perhaps it’s the “anything viral is bad” training that Dr Albert points to that has got so many of the established thought leaders in this space so uncertain about this new world order where straight line thinking is no longer valid, we’re all media companies and communities dominate brands?

mHealth apps: it’s like America’s Got Talent and we get to be the judges

Chris Wadsen may complain about the quality of “most” apps but there’s literally a bazillion apps in the various App Stores and you don’t even need a credit card to add another one so why get hung up on the quality of things that in most cases patients will never even find never mind think about using. I think it’s better to look at the world today like every company is a media company and the Appstores are like America’s Got Talent and we’re lucky enough to have a front row ticket because we’re all the judges.

Last week I commented on Cancer Research UK’s bid to get a volunteer to build them an iPhone and Android App and the key takeaway was that instead of asking for talent to come and help them they’d probably do better by accepting that the best mobile app developers don’t work (or volunteer) for them and that there’s more chance of success if they just opened up to the idea of looking elsewhere, found successful mobile content and brought in the developers of this to find opportunities for collaboration.

If within a hour of posting this a reader of my little blog had sent me some cool links can you imagine the quality of the feedback Cancer Research supporters could provide them with? To give you an example check out the work of ReThinkBreastCancer in the USA that I think is years ahead of where Cancer Research UK is when it comes to effectively engaging patients and raising awareness and funds via mobile.

To get an idea what Cancer Research UK would like like as a “media company” that shed it’s straight line thinking imagine if together with the WI it was to make a fun video like this and then leverage that to provide the storyline to a sequel to the $1 Billion grossing Calendar Girls movie. 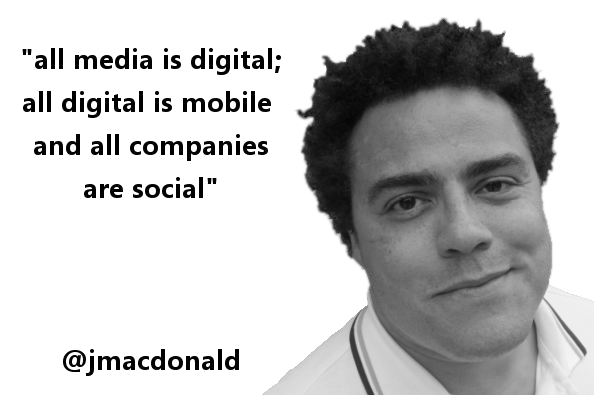 It’s only as a media company that the worlds largest independent charity would be able to have its supporters across the world queuing up to buy tickets to watch a movie about breast cancer awareness.

Just as most good authors are also good readers the variety of apps (rubbish ones included!) on the app stores are a mine of information for those looking to use their talents to build something amazing. The fact we have something that can be copied quite easily is actually the opportunity when we’re all media companies and even though both Apple and Alivecor know they’ve got IP protection where they need it they’re not overly concerned that the world’s medical professionals are going to be hunting down some website in China to buy knock off versions of their devices because they understand that customers want and value their innovative brands.

If you think the story with patients will be different please read my report on the challenge that we encountered when a patient presented to their family Doctor in Europe with a diagnosis that had been made using the Alivecor ECG device that I carry in my pocket. A trusted relationship remains paramount for healthcare to work effectively. If we’d provided that documentation (remember: the patient printed it all off and brought pages to their family Doctor with the name of one of our Doctors, the 3G Doctor logo and our contact details on the top) and this was a knock off/copycat device we’d very quickly be out of business, our reputation would be irreparably damaged and I’d be looking for a new job.

Ted Driscoll complains about the ability to copy but if you’ve got a great idea in 2012 you don’t have to start at the beginning and work out every single detail – the opportunity for innovation is happening because people like Dr Albert who are ECG experts don’t need to also know exactly how to make a brilliant iPhone app that is easy to use and looks good because they can simply say to their developer ‘make this bit work like that bit of that app and give it the overall feel and look of that app’.

In my opinion this would make a more fitting title for a MedCity article.

Perhaps Ted Driscoll is still hung up on the idea that mHealth is about putting data in a Doctors pocket but as I’ve explained at length before this focus amongst tech investors hunting for a ‘facebook of healthcare’ is much like someone trying to conceptualize the automobile of the future by analysing what’s wrong with the Model T: 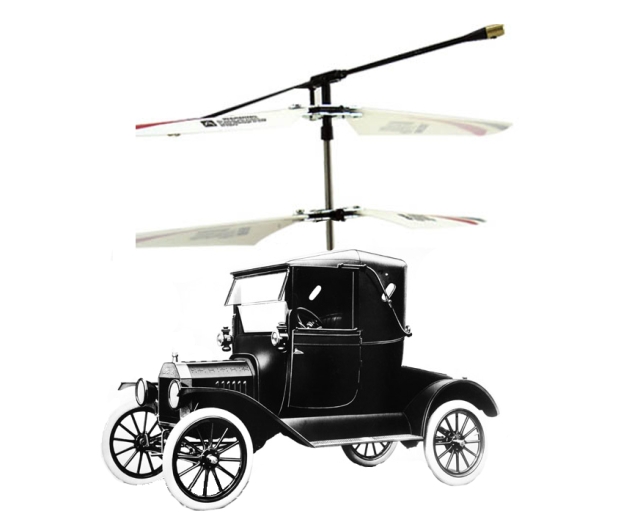 Of course VC’s are increasingly becoming pushed to the side by alternative funding routes eg. crowdfunding but perhaps if they rethought their exit strategies the mHealth market would make a lot more sense to them.

In posts on this blog and obviously when working with clients I’ve pointed out how telcos are leaving millions of $’s of profit on the table that they don’t even have to work for eg. I’ve shown how just making it easy for their UK customers to find the number for the NHS Direct service would have made any of the 3 major UK telcos at least a $1 million in extra profit per year since 2005!

When you realise there is so much low hanging mHealth fruit for mobile operators (currently their lowest spending consumers are affluent senior audiences despite the huge appetite there is for smart, uncompetitive and profitable VAS’s) that can add millions in profit with little things that are easy to copy, have no protectable IP and are completely straightforward to do (eg. you can start by just adding mHealth content during the device configuration process that you have to do anyway) maybe the increasingly squeezed telcos of this world with their non profit making mHealth units are the exit strategy?

Similar opportunities exist in the Pharma and Medical Device markets as the cannibal of cannibals looks to these markets for the next phase of growth. I could imagine the “at home ear exam tool” that fits onto iPhones that Ted’s recently invested in (Cellscope claims it’s “turning your smartphone into a digital first aid kit”) might make a lot of sense for a pharma brand or an online drug retailer that can manage the risk and see the opportunities it will no doubt present to further boost sales of antibiotics.

There is of course another way. Instead of talking about how the Healthcare industry isn’t ready or capable of embracing mHealth or dreaming of futures full of innovations that no one else in the world will be able to copy, VC’s could join in the global mHealth conversations so the world knows exactly what and who they would fund.