Will Operators’ Headlong rush to keep selling us on Tech (like 4G) rather than Services (things we could do with 3G) end in financial disaster? 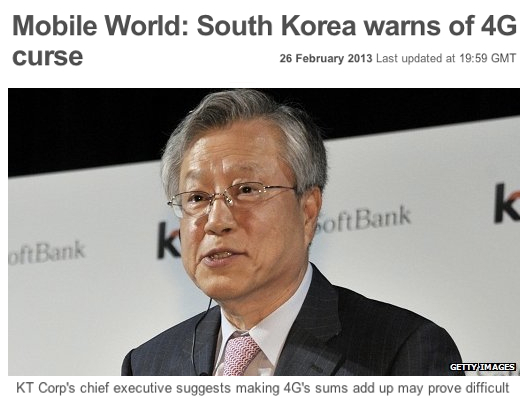 “In a telling aside the boss of South Korea’s biggest mobile network has warned his European counterparts that the shift to 4G might not bring them the riches hoped for.

“Our European colleagues complain that the explosion in data has not fully happened for them, that it did not come to reality,” Suk-Chae Lee, head of KT Corp, told Reuters.

“In Korea, they are data crazy. We have unprecedented demand. We cannot handle it. But the issue we have is that they are not willing to pay enough. So, the fundamental problem is, can we make any money out of it?

“LTE is very beneficial to the people but still the big question remains: can we go on? It is a blessing to customers but it is a curse on the operators.”

The news agency notes that about 30% of South Korea’s mobile users have signed up to 4G subscriptions.

It’s something for operators in the UK to chew over. Just last week they agreed to pay £2.34bn in an auction to make use of the 4G mobile spectrum”

“Mobile World: South Korea warns of 4G curse” from the BBC’s team on the ground at Mobile World Congress in Barcelona