Do we really want to be encouraging Patients to ask ‘Doc, did you use this checklist?’?

Following the #BMJHackDay tweets from this weekends BMJ Hack Day in London and I noticed a group working on the development of checklists for use by Doctors and from following some tweets I noticed there appeared to be an appetite for creating a scenario where Patients quiz their Doctors as to whether or not they used a certain checklist.

I think this would be a very bad idea for several reasons:

1) Having experienced medical professionals entering structured data into computers has been proven to be a colossal waste of time and resources. Thousands of Medical Professionals now talk to their computers so we must plan to move on from this dated way of thinking.

2) We already have clinically validated tools that can enable Patients to help their Doctors with the documentation of their own care. We must use the tools of our time and be prepared to let Patients help.

3) We already have initiatives to encourage Patients to challenge their carers about their hand wash status (eg. ‘Doc, did you wash your hands?’) but I feel this is very different as unlike handwashing status ‘did you use this checklist’ won’t lead to a simple binary answer to which the Patient can easily reply (eg. “Thanks!” or “Would you awfully mind washing your hands for me?”). Questionning an experienced Doctor about whether or not they have done something that the vast majority of them haven’t been trained to do and for which the evidence base isn’t clear could also do more to break down the Doctor/Patient relationship than it may ever contribute.

Imagine if all 400 passengers of a Jumbo Jet insisted on personally asking the pilot if he’d done all his preflight checks and you’ll get idea of how challenging this would be to put in place (for one thing passenger check-in would take 4 days once you take into account rules surrounding pilot rest requirements!).

4) Transformation of clinical practice is very difficult so it’s not a complete surprise for me to see that the momentum hasn’t continued to build out around the CheckListHQ website or twitter account: 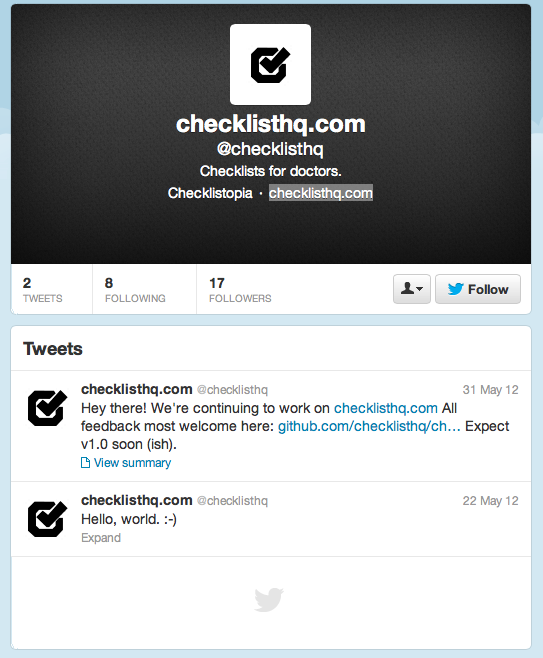 Many enthusiastic developers think the idea of checklists are a simple fix to the undocumented way we provide care today but their enthusiasm often fades as they realise:

a) Doctors aren’t always going to be comfortable using someone else’s checklist.
b) Most Doctors will want to see the clinical validation that shows your checklist will be effective with their Patients before they’ll even consider using it.
c) Doctors will want to be sure that their medicolegal insurer is comfortable with them using your checklist with their Patients.
d) Most Doctors work for institutions that will want to develop their own checklists so they’ll reject anything you produce because it’s NIH (Not Invented Here!) and many will think little of plagiarising any checklists you’ve created and not giving any attribution to you for all your hard work.

Most Doctor consultations in the UK remain completely undocumented from the Patients point of view. Providing Patients with a clinically validated interactive Patient History Taking Questionnaire before the consultation and a written Consultation report after the consultation should be a first step as it avoids the need to educate Patients to nag their Doctors, will ensure their concerns are documented and will provide Doctors with a much clearer formula for success because instead of being judged on their capacity to follow checklists they will be in a position to under promise and over deliver…

2 Responses to Do we really want to be encouraging Patients to ask ‘Doc, did you use this checklist?’?