In his first ever keynote at Mobile World Congress, Eric Schmidt, Chairman of the Board and CEO of Google, opened up by reminding the audience that “This has become the place to be for all of us in the computer industry… …Mobile Computing and Mobile Data Networks have really arrived around the world… …here in Barcelona they even work in the elevators!”

Taking the pulse of the industry he reminds us how:

Quite amazingly he then reminded the audience of why the mobile industry is really important and used a mHealth example to hit this point home by describing how an iPhone App was used in Haiti by a patient to learn how to treat his wounds and another buried victim used her mobile to update her Facebook status to alert rescuers as to her whereabouts.

With a “Tomi-Ahonen-style” comparison of the Nexus 1 with what we had 20 years ago… Eric began explaining how Moores Law is going to transform what the mobile will be able to do in the next 20: “We can literally know everything about what people are doing. If we want to and people want us to” and with a hat tip to the burgeoning M2M market he reminded us how “we’re not going to run out of the devices we can address if we know what we want to do with them”

Eric then started talking about how a walk round the tradeshow confined “The story is LTE and the technologies undermining LTE” but I have a sneaking feeling that his enthusiasm for 5-10 MB/s wireless connectivity is going to kill operator business models.

The best was yet to come though… as Eric pointed to how the “SIM can be used as a very significant identifier in the cloud” it reminded me of the value we’re getting from remote access to a Doctor with access to your EHR (and especially with the 3G Doctor Augmented Reality hack we’ve been playing about with) and talked of how “A device that is not connected is not interesting.. it’s literally lonely… …An application that doesn’t leverage the cloud is not going to wow anybody”. (Exactly what I’ve been telling medical device manufacturers for what feels like an eternity!).

As if replying to a question I find myself continually being asked by people who think we would be better using PC’s, digital TV’s etc to care for patients, Eric then asked and answered his own question:

“Why the mobile phone? …its because its the high volume end point. The iconic defining product. Its like magic… all of a sudden you can do things that you thought were not possible. …I call it “Mobile first” we now develop for mobile first and these are better applications”

As an example he referred to and then demonstrated how Voice Recognition only now works because of the connectivity to the cloud and the added value we now get eg. not only Voice recognition but also “translation”, the ability to “talk to someone on the phone even though we don’t share a language” (imagine the potential for Doctors to offer telephone advice in regions affected by war/natural disaster etc)

With his next point I thought he should have been giving the keynote for the mHealth session because (even though he said it half jokingly) it showed he has a much better idea of the mHealth market opportunity than most of the supposed experts:

Click this link to learn about how a Gates Foundation Grant supported initiative is trying to achieve precisely this.

He also referred to the Mobile Augmented Reality potential of our Camera Phones by showcasing how Google Goggles can be used to offer tour guide information as he visits a foreign city. Shame it didn’t point him to the courtyard for Christine Perey’s Mobile AR Showcase!

At this point Eric was joined by a colleague (Hartmann??) who conducted a search by voice for “Spanish restaurants in los angeles”… …and no one said wow (apart from me of course). I’m sure if Steve Jobs had done something half as good at one of his cult like gatherings I think I’d have been asked to help resuscitate half the front row!

Who then explained how connectivity and data processing in the cloud makes this possible: The audio stream is recorded and sent to a data centre which then uses speech recognition to compare the file with likely popular queries which are then pushed back to the phone with the search results.

He then showed it for the first time working in German with a search for the “Techno club berghain” panorama bar in berlin which gave results including maps, the wikipedia page, visitor reviews etc

He then went one further with a show of how it’s all connected by demoing the “Google Goggles” – “Mobile Visual Search” that gives a similar output when you just take a picture of something (OR SOMEONE?!) instead of saying it. In the demo he snapped a picture of the an image of the Sagrada Familiar (shown on the big screen) and before he even put it back under the image projector the search results were up (inspite of the creaking connectivity issues). Can you imagine patients using this to check they are meeting with a board registered Doctor? 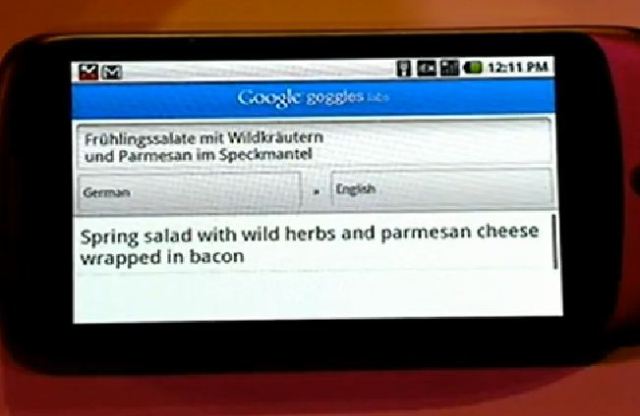 Whilst I have no doubt that this will make the concept of a pub quiz seem very quaint, I think it’s a shame he hadn’t chosen to read something more useful – like the small print you find with a medication – which could have been cross referenced in the cloud with his Google Health Record.

The stage was then joined by Erick Tseng who tried to mirror the desktop on mobiles by showing Flash running on android with a Movie Trailer, a gaming demo which will take mobile gaming onto wireless networks (and probably bankrupt every mobile operator offering unlimited data before the week is out!). Next up was a Google Earth demo in which he looked at how the Haitian presidential palace roof was collapsed before using the “voice recognition search application” by saying “Mount fuji“ to fly to the top of Mount Fuji. Imagine the school geography lesson potential of that? Not lost on Erick was the potential for Mobile to make a difference as he recognised how SMS alone had enabled over $20 milion to be raised for disaster relief in Haiti (something I noted previously is sure to prove a game changer in the US for acceptance of mDonation/mPayment).

As a nod to the telcos Eric touched on their network crunch concerns by summing up the “job” as learning how to handle the “1% of people who use up 70% of the bandwidth”. But to my ears all he seemed to be suggesting was making the other 99% of the people to start consuming!!!!

The take home message that stuck with me?

“Your phone is now your alter ego… …No longer something you just use it’s fundamental to everything that you do… …It’s an extension of everything that we are, it doesn’t think as well as we do, but it has a better memory. It has a more accurate notion of where we are, it can take pictures better than we can remember things, and on and on and on, and this power that has been invented by this confluence of things really does give us an opportunity to make… the new rule: Mobile first in everything”

PS. If you’re interested in developing for Android – check out Guruloft a project started by my good friend Anton Mannering which is running a series of training workshops.