On Thursday mHealth officially hit the Conference with the first ever full day agenda, although those with keen ears (like mine) also heard it being mentioned or referred to throughout the other talks (eg. Googles Eric Schmidt).

Disappointingly I found poor organisation undermined the good intentions and resulted in some small audiences (the morning session drew only 88 delegates – including speakers) particularly when you consider that there were over 49,000 delegates attending the exhibition.

> Speaker agendas were only decided, agreed, published and changed very late. The following image from the Daily Event Guide distributed on site shows that even the details of the speaker for the opening keynote was missing (it had been rumoured that Ryuji Yamada, President & CEO, NTT Docomo would be delivering this but Terry Kramer of Vodafone America gave the talk at last minute notice) 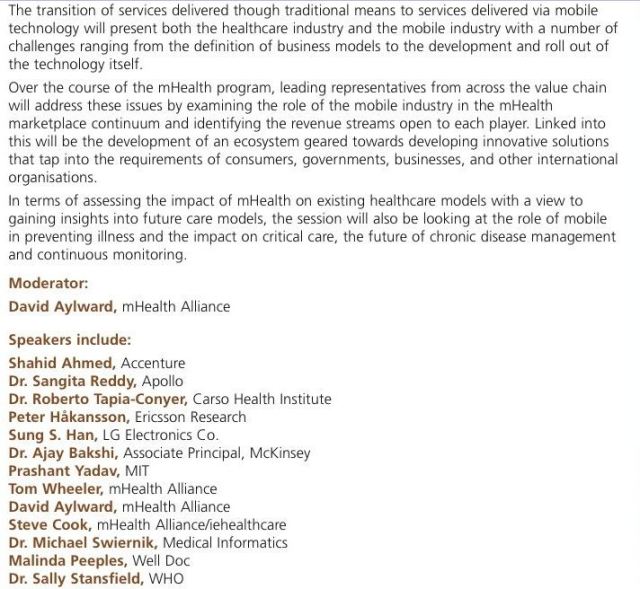 > Agenda/Speaker lists being distributed on site were very inconsistent and featured several inaccuracies and/or were completely lacking in any detail making them very unappealing. I have no doubt this reflected in the ability to generate an audience:

> the mHealth session took place in a room that was only accessible to delegates who had paid for at least a Gold or Platinum Delegate Badge. The same you need to hear any of the big keynote talks. Considering the event was organised by the mHealth Alliance (a charity set up by the UN and Vodafone Foundations) that was using the event to raise the profile of maternal health issues in the developing world I found this very confusing and was sadden when I witnessed the GSMA staff being particularly vigilant about who was eligible to pass the electronic cordon. Fortunately the speakers could invite a guest so I was able to help out some delegates who wanted to attend but I know that many were put off from trying to participate and others were turned away (in instances when I saw this happening I took their business cards and sent them the recordings I made of the proceedings) despite lots of empty seating.

Surprisingly this organisation was the responsibility of both the GSMA and the mHealth Alliance which probably means that it was probably just a straightforward case of too many chefs and last minute planning (one of the organisers admitted to me that they’d got the idea of organising the expanded event as a result of a number of stands becoming available – even big exhibitors such as Nokia and LG withdrew – and after the runaway success of the Mobile Healthcare Industry Summit that I helped Informa to organise back in December).

Anyway onto the business… check out my round ups of the all the talks: