CDC: “mHealth – the future of health is mobile”

Putting aside my “it always has been” views for a moment… some really positive news can be found in the presentation delivered at the mHealth Networking Summit (on Feb 4 2010 – sorry for the delayed posting!) by Dr Jay Bernhardt PDH MPD, Director of the National Center for Health Marketing at the US Centers for Disease Control and Prevention. Lots of nuggets of interesting material in there… don’t fail to check out the entire slide deck over at SlideShare.

If you can survive the heavily iPhone/US statistical skews/inaccuracies (apparently only 63% have sent or received a SMS according to the American Customer Satisfaction Index – which can hardly be considered accurate now that US operators are sending service provider information messages eg. “Your credit is running low”) there are some real gems.

Why we must be involved in mobile and social media

US citizens in cellphone only households (about 17.5% of all Homes) are:

I’ll have to contact the CDC on these statistics as I would love to learn more about how the survey was conducted. I particularly wonder if results were skewed as a result of greater honesty when answering questions on your unshared mobile Vs fixed line connection.

Who visits the CDC Mobile Site

Jay reported that the CDC Mobile Site (http://m.cdc.gov) (which has ignored the potential to automatically detect mobile or PC requests and serve the correct site) has had its H1N1 flu pages viewed 100k times in the past month. From a check of the mobile site this is probably a slight over estimate as pages are “thin on content” requiring visitors to make multiple page views as part of a single visit.

What’s more the 25,000 unique visitors a month is quite low – especially as they are reporting in another part of the presentation that they have 16,000 mobile subscribers.

This is quite an incredible statistic (GetJar – the worlds biggest open application store – report that those aged over 35 account for only 1% of downloads). Either health information is the killer application for 35+ mobile internet adoption OR this results from the issues with self reporting (maybe only seniors bother to answer questionnaires) OR it reflects the high volume of professional users (eg. Doctors) accessing the mobile site for its content.

For me this is where a lot of the SMS Q&A health services fail. With over half your users using iPhones or iPod Touch devices can you really claim the following information to be useful?

Wouldn’t it be better for these subscribers to use one of the countless free multimedia “how to cook” applications? Wouldn’t this deliver more value and be cheaper (eg. no distribution/SMS costs) 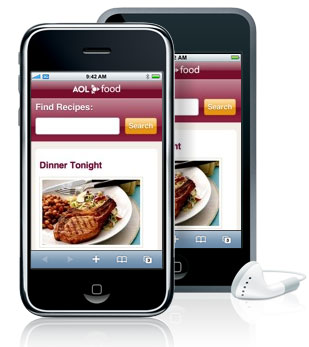 With 16,000 subscribers signed up for more information and a “3 per week” average, the CDC is sending out 48,000 SMS per week. With these being charged (due to the stupid US ‘recipient pays’ SMS billing model in the US) this could be costing patients $5,000 per week. Are we getting value for money here?

In my opinion enthusiasm is a little over reported with the claim that 87% are either “satisfied” or “very satisfied”. Particularly as this response follows a request of members that only 15% actually bothered to engage with – it’s only fair to presume that those who didn’t engage would have reported lower satisfaction ratings if they could have seen some value in responding.

With exposed followers and followed lists I wonder if this is security oversight? I can’t help see beyond the open door this leaves for scammers. For example there is a strong likelihood that an individual follower would engage with and accept/download an application that looks like it originates from the CDC.gov and I can see several major Phishing issues originating from this.

Great to learn that the CDC has someone as forward thinking as Jay on their team, and that he has been so generous in sharing his data and findings. I hope this will start many a discussion and that more authorities will be able to learn from the CDC about the value in sharing their observations of this developing market.

Be first to hear more by following Jay on Twitter: @jaybernhardt

4 Responses to CDC: “mHealth – the future of health is mobile”