Does ‘John’ need your time or attention?

Explaining the use of the Instant Medical History interactive questionnaires we use to provide documented consultations at 3G Doctor to a NHS GP last week (they’re now available within a new service that they can simply add to their NHS EHR called AskMyGP) and I was asked ‘but if I let my Patients use a tool like that how would I ever get them turned around in the time I have available?‘

He was referring to the production line office visit only style of consulting where the Doctor is under such time pressure that they’re interrupting their Patient within just 18 seconds before launching into a rehearsed speil like a needle dropping onto a spinning record in a desperate bid to turn around the Patient (without getting a compliant) within 5 minutes so they can rinse and repeat until the office doors are closed.

“…(11min) Meet John, John’s 55 years old, he has diabetes, he’s on metformin and glopizide, he also has hypertension and he’s been on a beta blocker and that was not sufficient to achieve the target blood pressure measures for quality so his Doctor promptly added a beta blocker and now everytime John stands up quickly he gets dizzy. He has high cholesterol, he has depression, he also has a bad back that hurts. He also has pain in his feet from neuropathy, he is obese. His Doctors told him that it’s time to go and see and endocrinologist – always a good idea, see a podiatrist for his feet and a dietitian and for that he has to go to a big medical centre so he will have to take some time off work and find someone to give him a ride. When he gets there he’s going to be told he has to quit the salt, quit the fat, quit the carbs, he’s going to be told to exercise which is of course very challenging given his bad back. He’ll be told to check his feet but John has a big belly and he hasn’t been in contact with his feet for a long time. He will be told to take his pills but of course he’s taking his pills otherwise how is he getting dizzy right? He’ll be told to check his sugars which he checks, he writes them down in a book, brings them to the Doctors office the Doctor reviews a little booklet with all the numbers and he gets a breeze on his face as he is moving through them and then he looks at that Hba1c as the only thing that matters and it’s 8.2% and that’s high. His LDL cholesterol is high. His weight is also high at 108kg and this is really what they’re talking about. He’s also in pain and he can’t sleep but that doesn’t come up in those conversations. The reason he can’t sleep is he used to be in a company where there were 3 accountants then 2 and now he is the only one in that capacity. That means he has to perform, he’s bringing the work home looking at things carefully and he’s realising that these numbers are not adding up and this company is going under and he’s going to have some serious difficulty with his financial obligations, insurance, debt and mortgage. The thing that bothers him most about home is not the mortgage it’s the fact that his older daughter has come back to live with him and she has brought with her two beautiful granddaughters and the reason they’ve moved in is because she was in an abusive relationship with her husband and they were doing drugs and alcohol and she was always wasted. And so he’s reflecting on the situation and the future of his grandkids and he opens up his mail and he gets a note from his primary care Doctor from his primary care office, indicating that because he’s not achieving the goals, the target controls for chronic disease he needs to go and find another primary care physician. So what’s up with John? 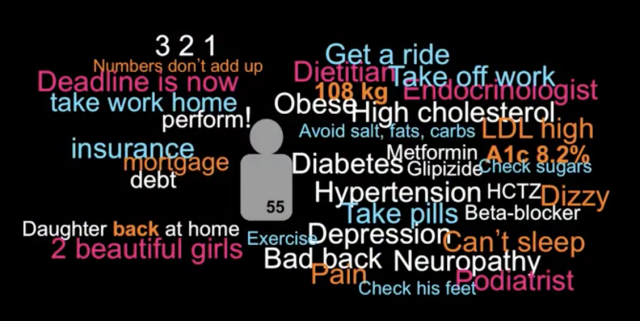 Is he not taking personal responsibility? Do we need to ‘educate’ him? So I will put forward that the problem with John is that he has a complex life, he has a complex context and the healthcare program that he has does not fit and any reasonable clinician would want to collaborate with John to co-create a program that fits but we don’t live in that world anymore. We live in a world in which the only acceptable answer to a situation like John with a high Hba1c and a high blood pressure and a high cholesterol and a high weight is to intensify the treatment. If we don’t intensify the treatment we will be told we have ‘Clinical Inertia’ because we’re not intensifying the treatment. Am I crazy (saying this)? Well here’s a survey of Primary Care Clinicians and it’s getting a bit old and needs to be updated but most strikingly look at the last item. A third of primary care clinicians think that their own practice is too aggressive, more aggressive than they would like it to be. When I show this to Primary Care Clinicians I’m looking for nods, people go ‘yeah, yeah, yeah’. When I show it to Patients there’s panic because you see Patients realise they’re not in charge but they thought their Doctors were and the Doctors are now saying they’re not in charge. So who is in charge?

So one of the ways of explaining this is to look at our evidence based guidelines and as you know we have evidence based guidelines that are disease specific, we have guidance for diabetes, guidance for type 1 diabetes, for type 2 diabetes, for diabetic nephropathy, for diabetic retinopathy of the right eye and of the left eye and we have very narrow – if there’s a society of the right eye there will be a guideline for the management of the retinopathy of the right eye by that society that you should know about. And there will be a quality metric associated with it that you should know about and there will be some certification that somebody will hold you accountable to. So what about these guidelines well there are several problems with these guidelines. One family of problems is the problem of by being focused on the one disease (whereas) they should be thinking about the issues of comorbidity but they don’t and this issue of comorbidity needs to be explored in detail. I find this very helpful, it was published by my colleague Scott Richardson:

He thought there would be three areas in which comorbidity might matter. One is this issue of baseline risk. Right so in this particular case the Patient has diabetes, hypertension and hyperlipidemia and that will effect the Patients baseline risk of coronary disease or neuropathy or retinopathy, so the comorbidities effect the baseline risk. Then there is the responsiveness to different treatments in which the fact that we for instance start an antidepressant or manage the depression when we’re trying to achieve glycemic control might make our glycemic control intervention more efficacious than if we tried to do the diabetes treatment alone. So the responsiveness also changes with the comorbidity and then there’s the vulnerability to side effects, so this Patient has neuropathy and is taking antihypertensives and if he takes a Neurontin or Gabapentin type of medicine that has a side effect of you know dizziness this person is going to have a significant problem with the side effect of dizziness. So when you’re writing a guideline you will see it’s impossible to take into account all of these comorbidities but if you don’t take them into account at some point you run into the problem of irrelevancy and I think that’s one of the problems with the guidelines. We did a study of diabetes guidelines and this is one of those kind of radar diagrams showing the proportion of guidelines that address the different comorbidities across a marque of recommendations. And the one that the guideline developers paid least attention to just for comorbidities was blood glucose monitoring. So if the Patient has tremor or parkinsons or can’t see it doesn’t matter their blood glucose self monitoring should be done. So no adjustment there. They did a good job with aspirin and you can easily imagine a guideline that reads something like ‘if the Patient has an allergy to aspirin, nasal polyps, anticoagulants you might want to hold off on the aspirin’ so they are suggesting some account of the comorbidities…

…But this is how much the guidelines took into consideration other aspects of the Patient context. In this case social and personal context. Nah.

…How about Patient preferences? Nah forget about it.

…Right so the guidelines are not only disease specific but they’re context blind. But that shouldn’t be a problem because the guideline guys are assuming that the front line clinicians can do the flexing right? I’ll take the guideline and do the adjustment to each individual Patient. But then people come in and take the guideline and make them into quality measures. And then they hold you accountable to the quality measures and the flexibility is gone. You know sort of unintended consequences. So then you have this care coordination, medical home things where you try to do all of these at the same time to the same Patient and what you end up with is this incredibly complex treatment programs and you recognise that they’re probably not safe so you add complex monitoring schemes and visits to try and keep it safe and then you know this care coordination that you’re doing is really without any sort of prioritisation so it’s just adding more and more and more trying to get Patients to do more and more and more. And we do this shift of self management which is just you need to do more of the work that we used to do for you and eventually this means that the treatment burden that the Patient and Care Givers have to face is just going up, up, up. And then eventually people can no longer cope and so what do they do? Well what they do is they pick and choose what to do and then when they don’t do what you like them to do then they’re ‘non compliant’, they’re ‘non adherent’, it’s their fault let’s educate them or threaten them with an amputation…”

14 Responses to Does ‘John’ need your time or attention?