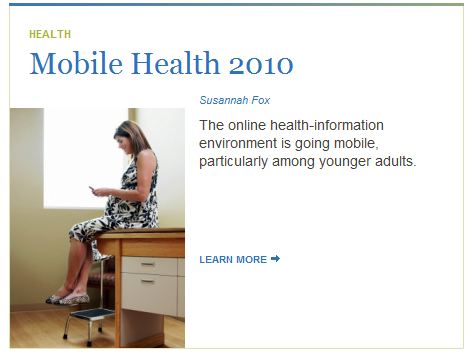 This unmissable report (which follows on from “The Power of Mobile” – another good resource) has started some great discussions:

“There’s a big number that’s a key to this dataset: 78% of mobile users have looked online for health information… ….Increasingly, the mobile phone will be used for public health by private citizens. The Pew data lays the foundation for us to begin to target populations and take advantage — in the best sense — of peoples’ communication platform choices where and how they live”

“Of course, most Americans turn to health professionals, friends, or family when they have a health question. Pew notes that the Internet plays a “growing but still supplemental role” and mobile connectivity has not changed that”

I can’t help but find the report to be underestimating the impact that mobiles are having on how patients are accessing health information – which is surprising as I normally find the Pew internet health reports to be some of the most accurate depictions of the marketplace (to the extent that I seem to be continually quoting them! eg here, here, here).

Taking Brian’s point to explain this “Of course, most Americans turn to health professionals, friends, or family when they have a health question… …and mobile connectivity has not changed that”. From the evidence I have (eg. the Caller ID registers of a busy Clinic and several Doctor’s on call mobile phones) this is widely inaccurate. In 2010 the patients mobile phone is being used for the vast majority of these calls to health professionals and I can find no evidence to suggest highly personal calls between friends are not following this trend.

I also find the report lacks an accurate appreciation of what exactly constitutes a mobile “app”, is dismissive of native apps (eg. SMS, Calender) and the various other ways that patients have of conducting a search using a mobile phone. To explain what I mean consider the following:

> Lots of apps are just taken for granted eg. Calendar, Calculator, SMS etc. because they are native (ie they work out of the box and don’t need to be installed) on the device. SMS for example is one such app that is used by the vast majority of people in the USA (particularly now that there are service broadcasts that mean those people who don’t use the functionality still have to use it eg. Top up notifications, Carrier Promotions etc)

> I feel that the research has discounted the large % of patients who have used the voice/text functionality to look up health information. In my opinion we should appreciate that someone ringing a friend for advice on even simple things such as a cure for a headache or bout of flu is actually using their phone to look up health or medical information. In my opinion the same rules should apply to calls to 911 services or to book an appointment with a family Doctor, check opening times at a pharmacy etc.

> Technical ambiguity: I disagree that “only 9 percent of mobile phone users have a software app on their phone that helps them track or manage their health”. For example I know a lot of patients who use the native calendar app on their mobiles to remind themselves to take their medications and I wouldn’t be surprised if they didn’t consider it to be a health app in the same way that they might not consider their car to be an ambulance just because they’re going to the hospital in it. Whilst the vast majority of phones feature the Calendar “software app”, the statistic also seems inaccurate as it discounts the potential for the “browser” (which is another app) to be used to track/manage health (the report suggests 40% of the respondents have access to the internet on their mobiles).

What do you think?