Is this the mHealth Space Pen? 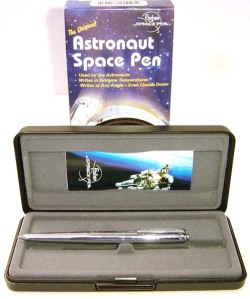 “The Million Dollar Space Pen” was one of the favorite myths I was told as a child. If you’ve heard it skip the next paragraph:

“Discovering that the pens of the Astronauts didn’t work in work in zero gravity NASA’s engineers set about designing and manufacturing a new type of pen that would be able to work in a vacuum, be used upside down, underwater and in zero gravity… after perfecting the Space Pen at a cost of a million dollars the American President was so proud that when he met with his Russian counterpart he showed him the incredible device and asked him what his Astronauts were using to write when in space. The reply was simple “I’m pretty sure we just use pencils”

It’s a great myth because it reinforces the stereotypes of nerdgineer’s and wasteful bureaucrats and reminds us to always look for the simple (albeit crude) way of doing things first.

This brings me in a roundabout way to a story by Denis Campbell, Health Correspondent for the Gaurdian, in which he writes about what I think might turn out to be the mHealth Space Pen:

Apparently £4 million is being spent developing a means for Sexually Transmitted Diseases (such as herpes, chlamydia and gonorrhoea) to be diagnosed via mobile phones:

“People who suspect they have been infected will be able to put urine or saliva on to a computer chip about the size of a USB chip, plug it into their phone or computer and receive a diagnosis within minutes, telling them which, if any, sexually transmitted infection (STI) they have. Seven funders, including the Medical Research Council, have put £4m into developing the technology via a forum called the UK Clinical Research Collaboration”

“…The self-testing devices are aimed at technology-savvy young people. Public health experts are concerned that, although most STIs occur among that age group, many are too embarrassed to visit a GP or a genito-urinary medicine clinic to get tested and therefore continue to suffer and potentially pass the disease on. Doctors hope that the ability to obtain a private, confidential diagnosis will overcome their widespread reluctance to take a test. The developers of the rapid testing devices expect them to be sold for as little as 50p or £1 each in vending machines in nightclubs, pharmacies and in supermarkets, as condoms are. They are drawing on nanotechnology and microfluidics, the creation of miniaturised laboratories”

“Your mobile phone can be your mobile doctor. It diagnoses whether you’ve got one of a range of STIs, such as chlamydia or gonorrhea and tells you where to go next to get treatment,” said Dr Tariq Sadiq, a senior lecturer and consultant physician in sexual health and HIV at St George’s, University of London, who is leading the project. “We need to tackle the rising epidemic of STIs, which have been going up and up and up. Britain is one of the worst [countries] in western Europe for teenage pregnancy and STIs. That there’s a major embarrassment factor here, especially among young people, makes the situation worse.” Some people do not get tested because they choose to do nothing about their symptoms, such as an itch or discharge, or dislike clinics’ waiting lists or opening times. With some STIs people can remain infectious, even when the initial symptoms have disappeared”

Incredibly whilst the story refers to the involvement of the NHS’s Technology Adoption Centre, the National Institute of Health & Clinical Excellence and Mobile Phone Operators including 02, it also refers to the more obvious simple solution when it suggests the technology will be “similar to pregnancy testing kits”. Last time I checked Pregnancy Testing kits didn’t need to be plugged into a computer…

My advice: Save yourself £4 million and watch this video of me from Feb 2008 in which I explain how billions of basic mobiles that are already in the market can be twinned with coded point of care tests to enable patients to safely access sexual health education, assessment & testing with a solution that also eliminates the major issues of device counterfeiting/theft. Instead of a device that needs to plug into a mobile why not leverage the lowest common denominator: the mobile web and a patients ability to complete a mobile phone based questionnaire

3 Responses to Is this the mHealth Space Pen?