Fergus Boyd, Head of eBusiness, Virgin Atlantic, gave a great presentation at the EyeforPharma eMarketing and Mobile Conference in Barcelona. Key take aways for me:

“We see apps as the icing on the cake”

“mobile internet will be the way many passengers access VAA.com in the future” 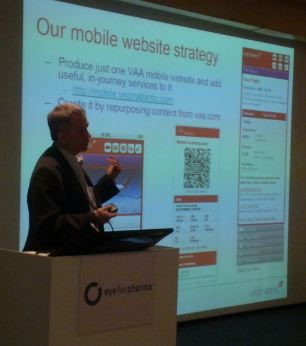 No mention of the worlds biggest multimedia platform though. This surprises me not because there are more people using MMS than mobile internet but because it highlights how bad a job telcos have done deploying and marketing the cash cow that Tomi Ahonen describes so well:

“The usage of MMS has now passed 43% of the total mobile subscriber base and at 2.5 Billion active users, MMS now has more users than the total of people who access the internet by any method (at work, at home, at shared computers at libraries, schools and internet cafes; and via mobile internet). MMS became the second most used data service on the planet last year. And what a service. MMS user base grew by 21%, and MMS revenues grew by 15% reaching $39 Billion last year!”

Of course you could blame the mobile device makers – but more than 85% of the global installed base of mobile phones are MMS capable so who else can be at fault for it not even being on the radar of big global firms that actually already get mobile?