“How the Blind Are Reinventing the iPhone” 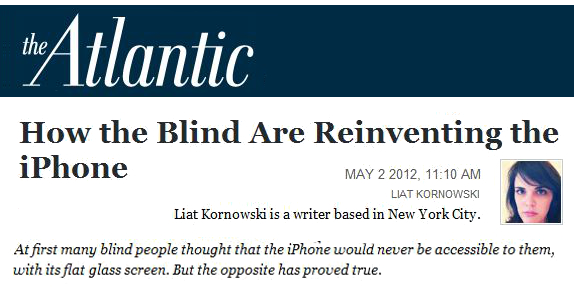 A great article by Liat Kornowski in The Atlantic although I’m surprised it’s so hard on Android (for one thing it doesn’t have to have that awfully dated slide to unlock!).

“At first many blind people thought that the iPhone would never be accessible to them, with its flat glass screen. But the opposite has proved true”

I find it fascinating how many insights my mHealth focus provides me with into future mobile user experiences. Only last year a big mobile brand I was consulting to told me about their new “Heads up” user experience strategy.

I took a good look and told them I thought that even in concept it was half baked and nowhere near ready. I amazed them when I said I’d already seen much better Blue Peter experiences and advised them to hire this incredible salesman I met last year in one of California’s Apple retail stores because in my opinion he’d already gone way beyond what they were even imagining:

It’s also interesting to see how quickly things change as I recall only a few years ago how we used to meet with mobile industry execs who couldn’t actually accept that there was any need to mobile video call a Doctor. The typical demographic of a mobile content exec at the time was an able bodied healthy young man for whom consulting with a Doctor on a mobile video call seemed ridiculously superfluous.

We learnt to accept that 3G Doctor will not be immediately obvious to those who:

I now think it’s abundantly clear even to those at the back of the class that those who will create the differentiated mobile user experiences of tomorrow will have empathy by the bucket load.