Patients are from Mars, Pharmaceutical Marketers are from Venus, can mHealth connect them?

Following a 1000 person survey by GfK NOP between 3-5 August 2012, the ABPI (the government recognised industry body that represents members who supply 90% of the medicines that are used by the NHS) is claiming that the “General public has fundamental misunderstanding of cost and value of medicines“.

It highlights for me the huge disconnect that exists between pharmaceutical brands and their customers. Even the objectives of the press release make little sense eg. after claiming that amongst the general public there is a “poor understanding of the huge expense involved in their discovery, development, approval and launch” they then attempt to lend weight to the finding that the vast majority of these same customers “would like spending on medicines to increase or stay the same“.

Commenting on the research, Stephen Whitehead, Chief Executive of the ABPI, said that “in the coming months we will be doing much to educate people and patients of the facts about medicines – the huge benefits, the low prices and the high cost of development“.

I wonder if they’d do better if instead of blaming patients on their own communication failures they instead tried to address their quite obvious failings. To make the point here’s a photo of the packaging and unfolded patient information leaflet from the nearest branded medication that I could lay my hands on: 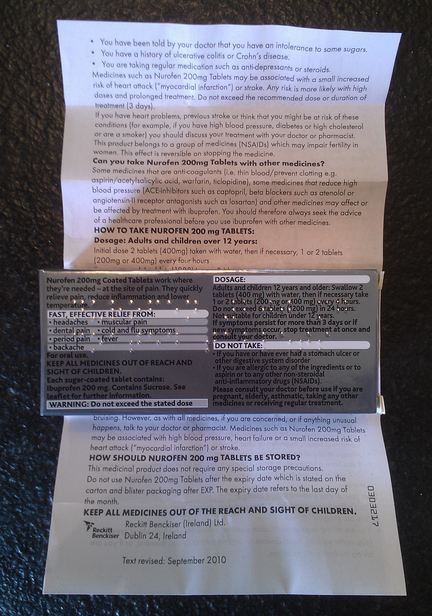 If you tried could you actually design packaging that was this impersonal, bland, out-of-date and lacking in interactivity? Surely it cannot be only me that thinks it remarkable that this is the ONLY package in my cupboard that doesn’t have a URL on it?

For the record my milk carton has 2 URL’s on it’s packaging (both of which lead to mobile optimised websites) and even my ketchup bottle has woken up to the existence of the internet (for readers involved in the design of pharmaceutical packaging this is a public global computer network system that is now accessed by 80% of British homes).

2 Responses to Patients are from Mars, Pharmaceutical Marketers are from Venus, can mHealth connect them?