Gigaom: Mobile health in 2013: from the gym to the doctor’s office 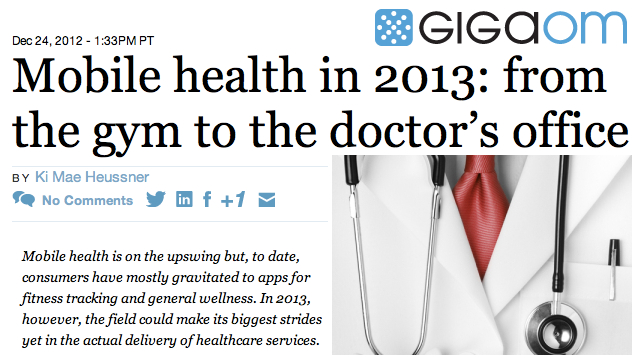 “Thanks to a boom in digital health, the smartphone has assumed the role of everything from an ever-present fitness coach to FDA-approved heart monitor. And, as consumers move to mobile platforms, surveys show that more people are not only turning to their mobile devices for health information, they’re quickly imbuing the new technology with a great deal of trust (maybe too much trust given the poor quality of many apps currently available). A study earlier this month from Royal Philips Electronics found that nearly a third of Americans said they use interactive health applications or symptom checker websites instead of going to the doctor.

But as some point out, the adoption of mobile health apps has been uneven, with most consumers gravitating to those for exercise, diet and weight and doctors indicating interest in, but not necessarily widespread adoption of, mobile apps. Given the fact that general fitness and wellness apps can appeal to a broader audience of healthy consumers and don’t require buy-in from doctors, insurance companies or other institutional players, it makes sense that mobile health, to date, has moved faster for fitness applications than clinical ones.

In 2013, however, mobile health could make its biggest strides yet in the actual delivery of healthcare services — from disease management to remote health monitoring and more”

I think the author Ki Mae Heussner is under the same misconception as the authors of the Pew Internet Research Mobile Health 2012 report eg. that the use of a native or downloaded mobile app can’t be considered as a Mobile Health App unless the app is for smartphones and is designed/marketed/branded and downloaded specifically for it’s health use.

To set the record straight I think it’s important to appreciate:

2) There is widespread adoption of mobile apps by Doctors eg. there isn’t a working Doctor in the USA who doesn’t use caller ID and SMS with colleagues, Epocrates released data claiming that by the end of 2009 more than 20% of US Doctors had downloaded the Epocrates medical app to their smartphone, etc.