The Smartphone Physical to debut at TedMed 2013 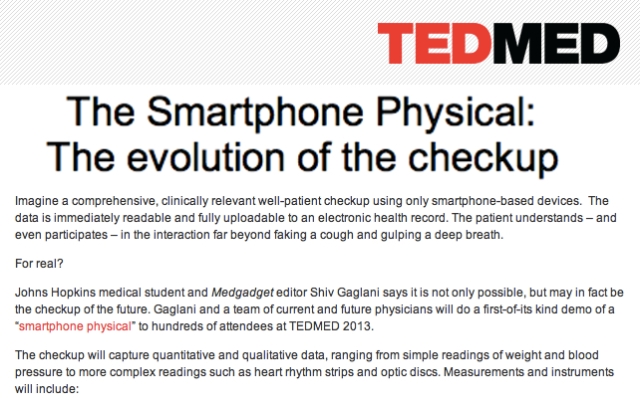 This TedMed blog post by Stacy Lu has announced that Shiv Gaglani, a MedGadget Editor and John Hopkins Medical Student, and ‘a team of current and future physicians” will take to the stage of TedMed 2013 with the debut of “The SmartPhone Physical” a “first of it’s kind demo” of a “well-patient checkup using only smartphone-based devices“.

Of course this isn’t a first of a kind at all – Eric Topol MD has already demoed something very similar on Prime Time US TV shows (eg. CNBC and the Colbert Report) and we were providing similar smartphone based physical checkups for delegates at mHealth events all the way back to the Mobile Healthcare Industry Summit in 2009 – and I took it beyond demo when I used such tech a few years ago to diagnose a delegate who was unaware that they were suffering a MI at a Mobile Industry event (following speedy admission to Hospital and some treatment there was thankfully a very good recovery!).

None of that of course takes away from the cool profile that the Smartphone Physical website has made of an array of mHealth sensors: 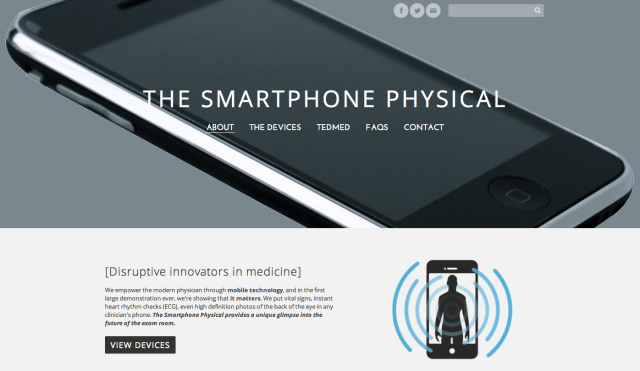 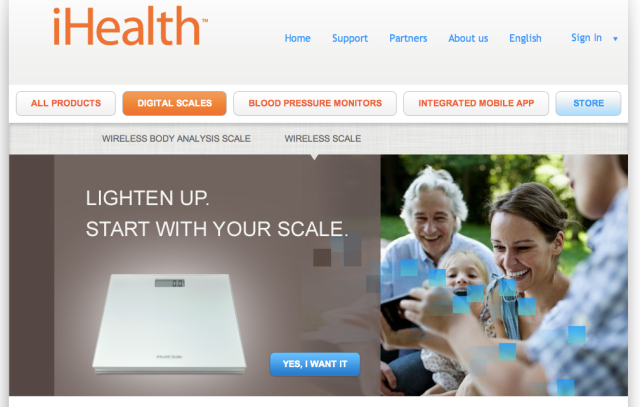 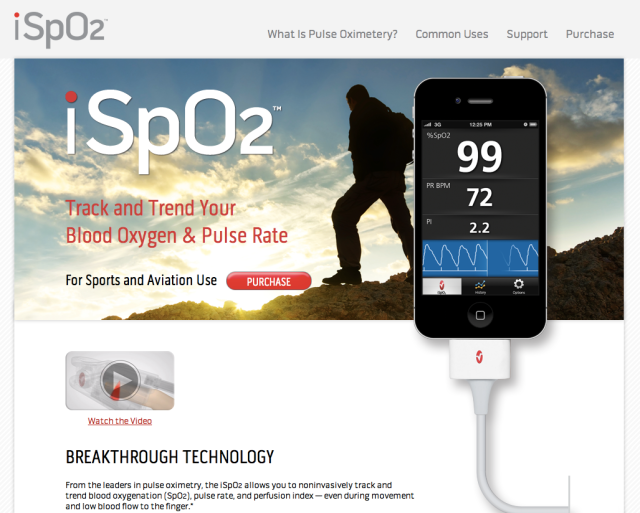 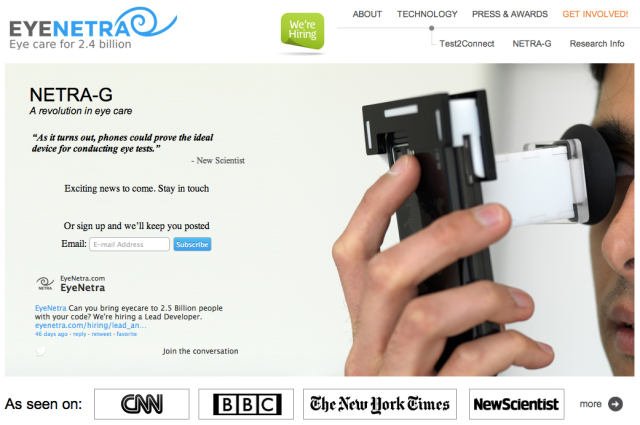 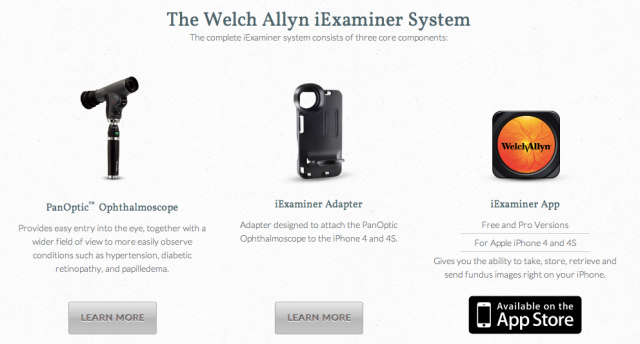 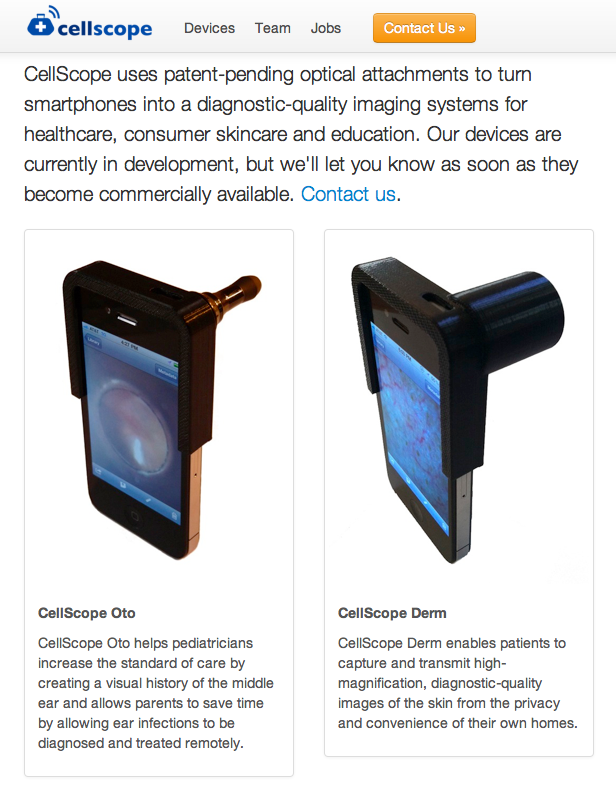 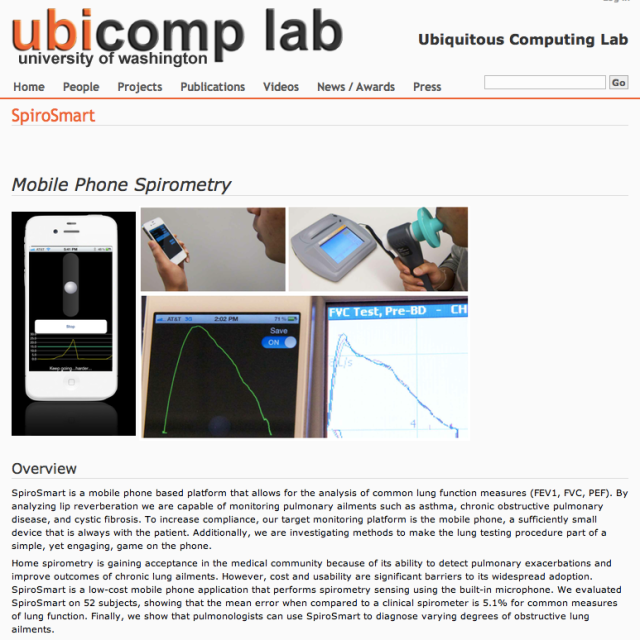 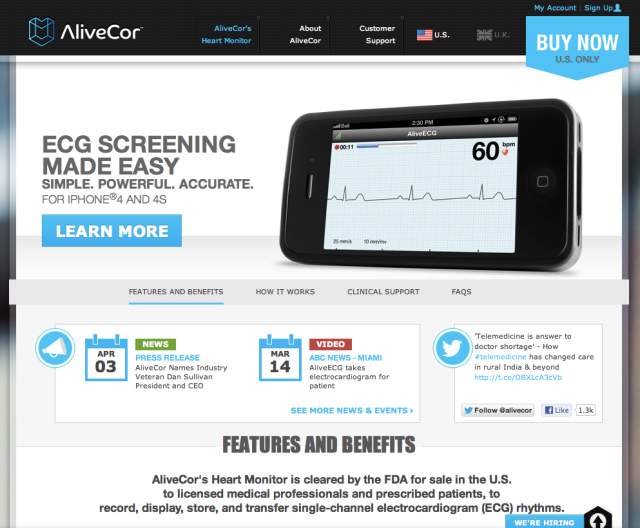 > “Body sounds: A digital stethoscope from ThinkLabs auscultates and amplifies the sounds of a patients lungs (posterior chest) or heart (A, P, T, M areas on the anterior chest)” 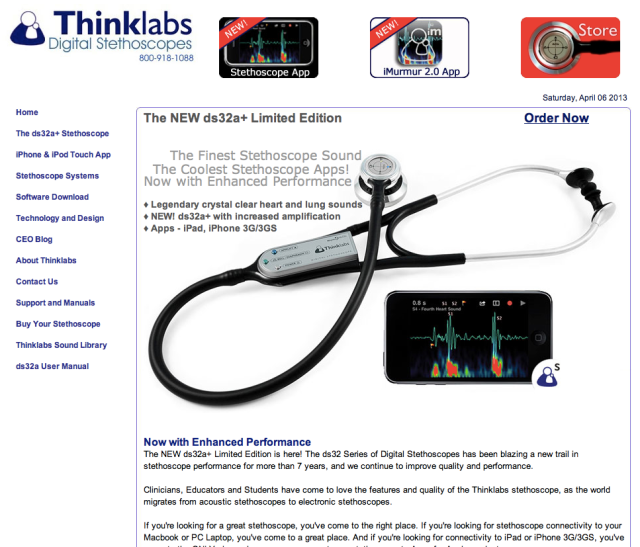 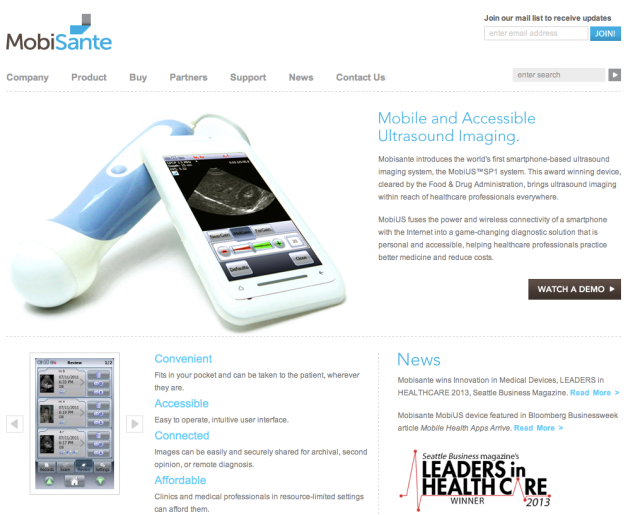 What would I include in a Smartphone Physical?

Shiv Gaglani has done a great job bringing together 10 devices so I thought it might be interesting to think of another 10 that could be included:

It astounds me that a medical student in 2013 hasn’t put a clinically validated interactive Patient history taking questionnaire into the mix as most medical schools have been hammering the importance of listening to what Patients tell you into their students even since Sir William Osler fathered modern medicine more than a hundred years ago (as a Founding Professor at John Hopkins).

I could imagine that a rich Mobile Video Library with animations and clinical experts explaining how to use the mHealth devices would prove very helpful: 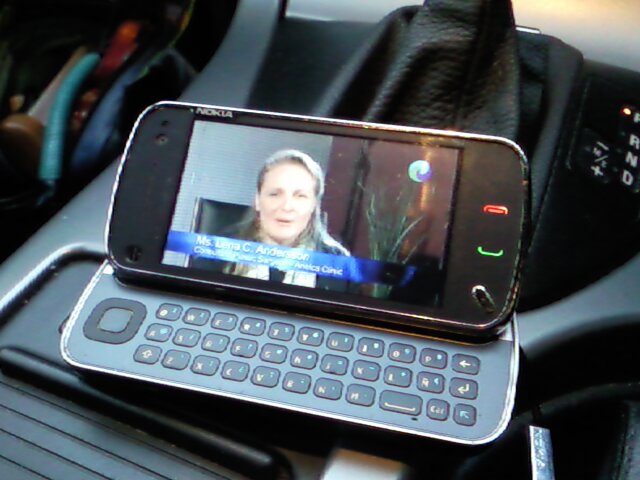 No Patient should be without anytime anywhere access to their important up to date health information eg. like Microsoft offer with their HealthVault service: 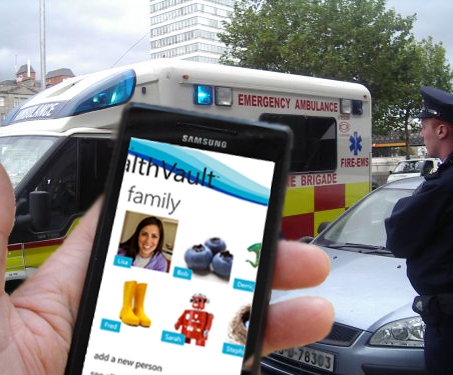 > Making sense of a POC Test

How about using the camera to take make a video of the Patient walking or doing a test or a photo of a PoC test eg. an Urinalysis strip: 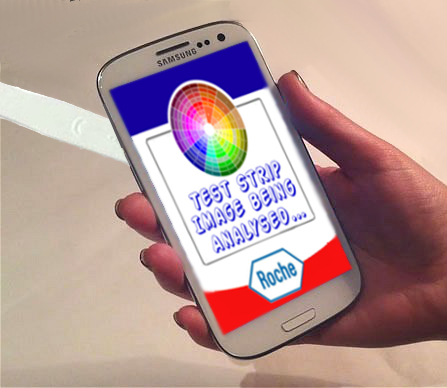 A basic gallery app could help determine if the Patient is colour blind: 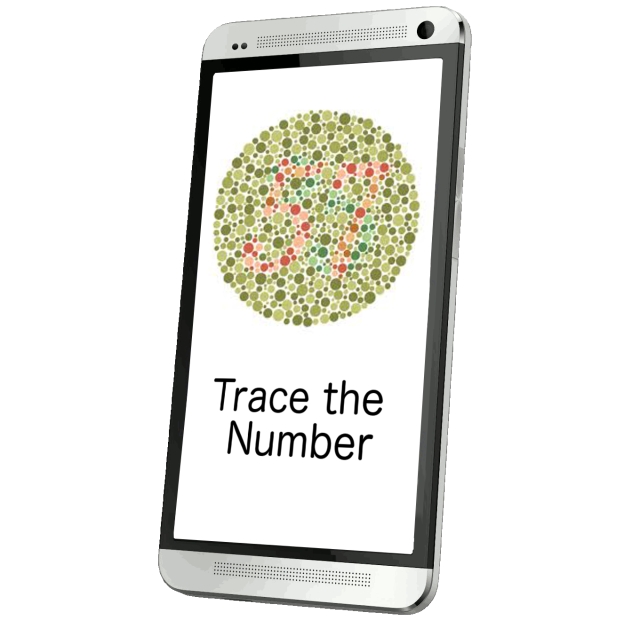 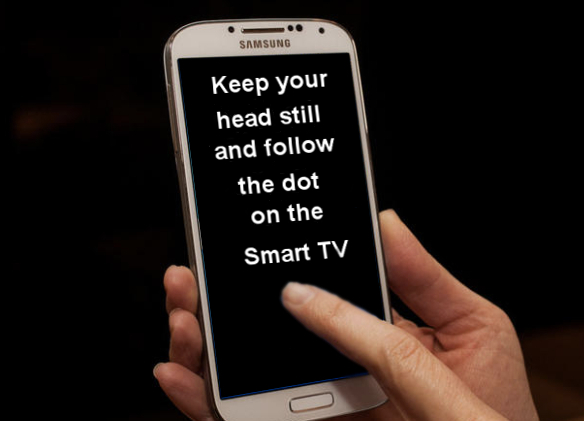 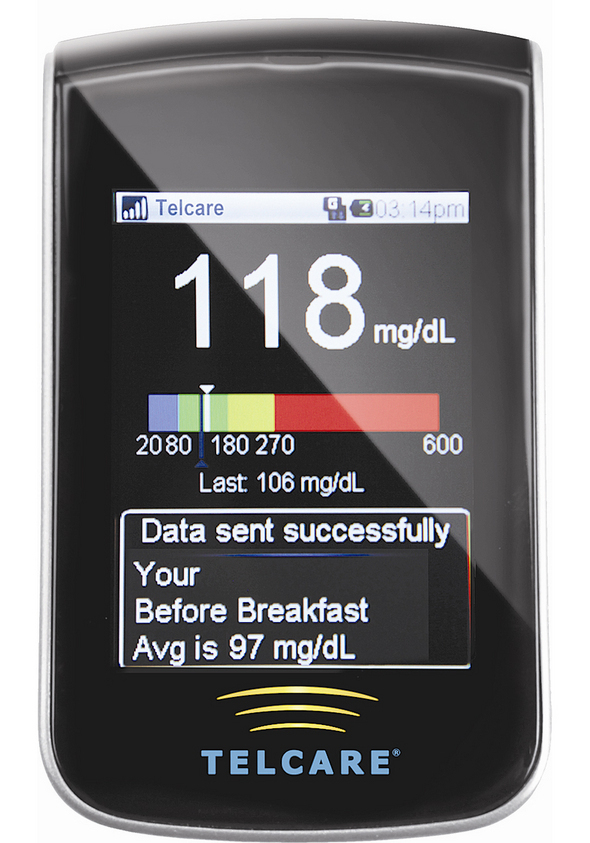 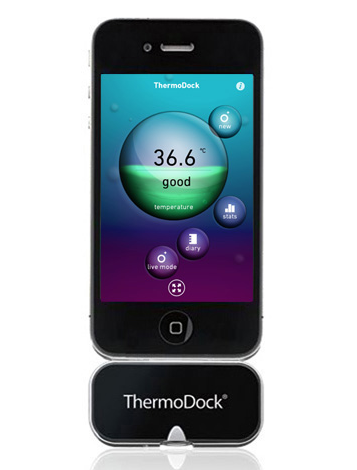 Everyone who’s attending TedMed 2013 will have a Smartphone so I see no reason to think of the physical check up as a single event especially when long term measures can provide so many useful insights eg. Sleep by X Motion (the world’s best selling iOS mHealth app): 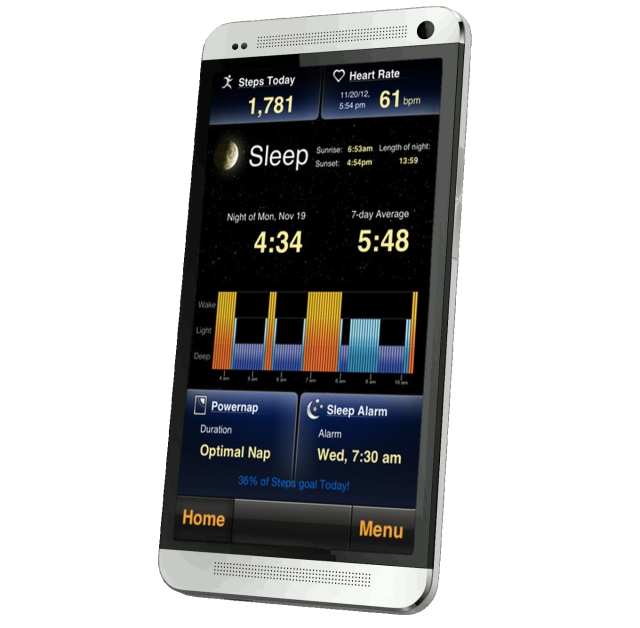 It’s obvious that unconnected care experiences can present major challenges. Remote registered Doctors with not only access to the data that’s being captured but also an understanding of how it’s being captured and a view of the Patients Medical History could really help Patients and Providers as they seek to derive value from the Smartphone Physical:

I’ve recently been trialling the FLirOne – an Infrared Camera attachment for the iPhone – from FLIR and will be reporting soon (link to be added) on some of the interesting applications we’ve found for this new sensory capacity in medicine. Within 24 hrs of having it on my phone I’d already identified where £,000’s of heating costs are being lost in Healthcare facilities (which is also important as it impacts on Patient comfort levels) but the potential for this to augment the diagnostic abilities of Doctors will be very interesting – while thermography is already commonplace amongst top flight equine veterinarians (monitoring for foot balance/problems/treatments/arousal/etc) I can imagine it will have huge potential for finding difficult veins, treatment and monitoring of sores, musculoskeletal pain, etc. 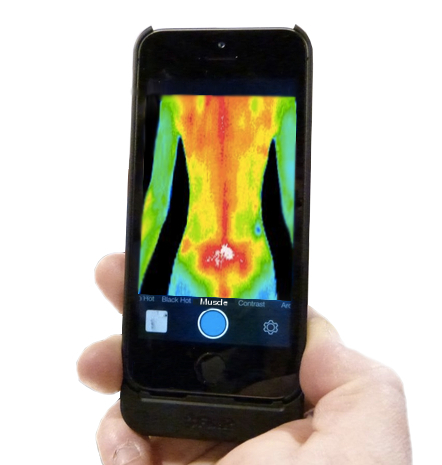 Nothing on the market yet but it’s easy to imagine some applications for an UV Camera in areas of dermatology or on the forward facing camera of a tablet for teaching young people how to properly apply sun protection:

What would you like to see added to the Smartphone Physical?

12 Responses to The Smartphone Physical to debut at TedMed 2013