Check out this controversial TedXUCSD talk by Camille Saltman, President of MD Revolution (a preventative health lab in La Jolla that’s modeled after a gleaming Apple retail store) and former President and coFounder of the Wireless Life Sciences Alliance (an organisation that has tried for years to push back against the term mHealth). 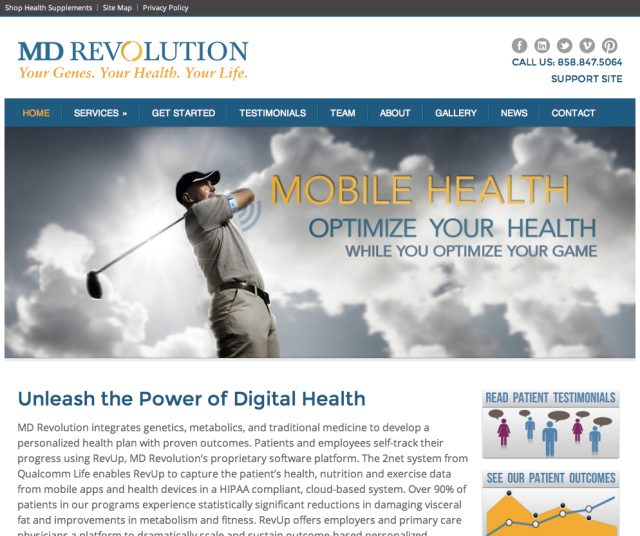 A few of my thoughts:

I think it’s revealing that Camille has moved on from a focus on “Wireless Health” but is now using the possibly even more confusing “Digital Health” term despite having a great appreciation of the diverse range of Patient empowering mHealth innovations that are having success as they hit the market because of their connection to the newest mass media:

“on the mHealth side, on the Digital Health side, when we started the Wireless Life Science Aliiance the only mobile device that was available to consumers if you can imagine it was a cellphone! There was nothing else and now there’s so much available it’s incredible. I wear a FitBit and it monitors my steps and my activity level, you can get a wireless heart rate monitor from the Apple Store to measure your blood pressure and you use it with an iPad or a cellphone, when I exercise I use the Polar strap and the Digifit app to try to count my intervals and my heart rate, you can track sleep, you can track your weight with a wireless scale…” (12min)

After the Nokia Decade it reminds me of that funny Monty Python sketch where John Cleese asked what the Romans ever did for someone to say “the only mobile device that was available to consumers if you can imagine it was a cellphone“. Surely we all know that the cellphone has already and continues to transform how we access and deliver healthcare services the world over?

In it’s entirety I found the talk very hard to follow because it’s quite clear that while trying to make a point that Doctors are behind the times Camille has demonstrated a lack of appreciation of the range of tests available to Doctors today and a rather fundamental lack of understanding as to why Doctors record a Patients BMI:

“the majority of physicians are using tests to measure our health that were developed in the 1800’s. It takes 14 years or more for the great science that’s developed in places like UCSD to go from published scientific research to the clinicians office. A few examples BMI: BMI is a commonly used measure of people’s health Body Mass Index. You’ve probably all heard that professional athletes can have the same BMI as a morbidly obese person because muscle weighs so much more than fat – so not a very good gauge of health” (4 min)

I think it’s very naive to suggest there are any qualified Doctors who think of any single index as a stand alone ‘gauge of health‘ especially BMI (even if it is widely abused by advertisers). Perhaps there is some problem unique to the USA perhaps as a result of the shortage of family Doctors but I find it hard to imagine Doctors who are consulting Patients about their body mass aren’t also enquiring about their exercise habits, occupation, professional athlete status (perhaps when they’re hopping onto the scales or standing under the stadiometer), etc.

I think it would be great to hear Camille describe with some more detail how the “Where we want to be” experience might look in reality: 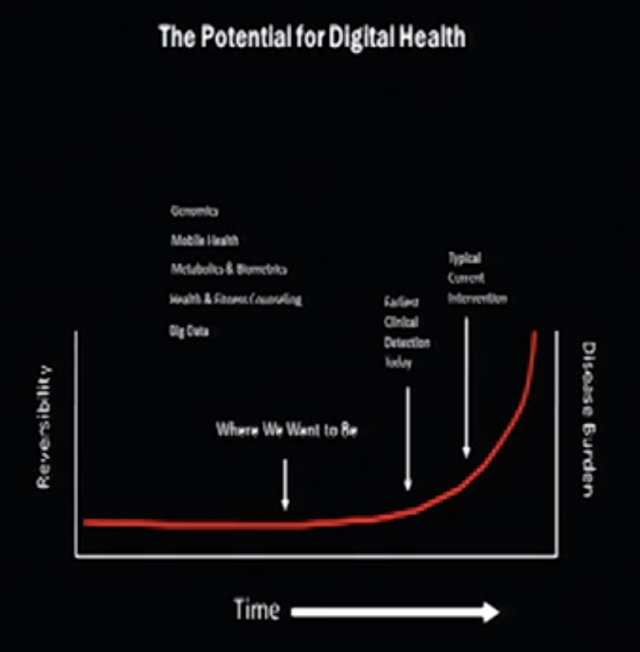 As I think any focus there might quickly get swamped competing with the unregulated marketing machines of unhealthy products/services. Perhaps MD Revoluton has a breakthrough engagement strategy because I imagine it will be required as most individuals will still want to make their own decisions, Doctors won’t ever be able to compete with the advertising budgets of unhealthy brands and many people will simply tire of and/or resist policing of their behaviour by a ‘digital health’ advisor in the same way that people today already ignore healthy practices.

What do you think? Is ‘digital health’ going to end the chronic disease epidemic or will it even counter the negative health impact of the increasingly sedentary lifestyles that modern technologies are enabling?