The Doctor Can See Your Data Now 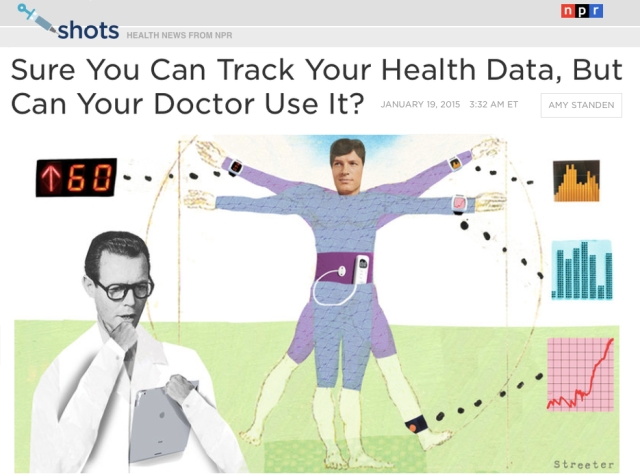 An interesting NPR story by Amy Standon asks if Doctors can use Health Data that Patients track.

“Dr. Paul Abramson is no technophobe. He works at a hydraulic standing desk made in Denmark and his stethoscope boasts a data screen. “I’m an engineer and I’m in health care,” he says. “I like gadgets.” Still, the proliferation of gadgets that collect health data are giving him pause”

A desk “made in Denmark” and a stethoscope that “boasts a data screen” seem to me to be very unusual ways to explain that a Doctor isn’t a technophobe. I suppose that’s just another symptom of the systemic failure to provide documentation of consults.

Besides outcomes my qualification of whether a Doctor is behind/ahead of the times is a simple: does she provide 24×7 access, compassionately listen to her Patients and document their consultations? I’m not at all surprised that I’ve not once read about the country of origin of the desk of the Doctors that I think are particularly smart and innovative.

“Abramson is a primary care doctor in San Francisco and lots of his patients work in the tech industry. So it’s not surprising that more and more of them are coming in with information collected from consumer medical devices — you know, those wristbands and phone apps that measure how much exercise you’re getting or how many calories you’re eating”

For me these comments highlight how important it is for us to move on from the 2,000 year old office visit model and start providing Patients with the ability to interact with and share information with their Doctors BEFORE presenting in the consulting room.

“Abramson says all the information these devices collect can be overwhelming. One of his patients arrived with pages and pages of Excel spread sheets full of data — everything from heart rate to symptoms to medications. Abramson says he didn’t know what to do with it all”

We’ve all known for years that the conventional undocumented in/out 5 minute unprepared Doctor consult is overwhelmed by the basic information that Patients bring to the consultation from the Internet so why in 2015 is anyone surprised that data capturing wearables are making things even more challenging for Doctors who won’t evolve beyond the office visit?

Of course mHealth sensor companies need to evolve from offering products to offering services but there’s plenty of very good examples of that which NPR could be highlighting the important work of instead of bemoaning the failure of startups who have developed standalone gadgets eg. Telcare’s m2m glucometer and Diabetes Pal apps, Alivecor ECG monitor and the Alivecor Read services, etc.

I think it’s important that we’re all mindful that it’s not a failure of the Patient that we’ve not kept up with times and provided a way for them to use the powerful devices in their pockets to manage their health eg. could you imagine how long a bank would last if it took the same approach and offered no mobile interactivity while expecting customers to do all the record keeping?

“Going through it and trying to analyze and extract meaning from it was not really feasible,” he says. To Anderson, the spreadsheets just didn’t say all that much. “I get information from watching people’s body language, tics and tone of voice,” he says. “Subtleties you just can’t get from a Fitbit or some kind of health app”

I think this really highlights how strikingly different times are from when Doctors were trained and underlines importance of proper mHealth training for Healthcare Professionals.

When I studied how Doctors here in Europe renew driving license application forms for Commercial Drivers with Diabetes I was astounded at the practices that I witnessed. Patients and Doctors bluffing one another along with the Doctor focused on ‘body language, tics and tone of voice’ but actually having no real idea how frequently the Patient was testing or what insights could be drawn from the data that was being expensively gathered but completely overlooked because it wasn’t even being properly collected in the first instance never mind charted to help with understandings. (Note: There is a legal case going through European courts that will prove very significant for this market and I’ll be sharing it as soon as I can with readers).

“Blum says, “We can’t make the leap that just because the data from these low-risk devices is coming in digitally doesn’t mean that it’s accurate.” He says validation studies are needed. Often that task falls to doctors and hospitals. At UCSF, Blum now heads an entire new department created to sort out which technologies are game changing and which are dead ends”

The approach to mHealth that’s being taken by US Hospitals continues to astound me. If you have future predicting abilities and can sort the game changing from the dead ends I think you should spin that out of your Hospitals business of providing healthcare and start making billions as a tech/patenting company because even global tech giants are struggling with this.

“Other health care groups are following suit, running pilot studies that give devices to people with certain illnesses to see whether they help”

Why are Healthcare Groups still talking about pilots in 2015 when +90% of glucometers are still unconnected, diabetes is the most expensive chronic disease and there’s a paper published in a peer reviewed publication showing that there’s a cost reduction of $3,300 per year per Patient when we connect their care?

“Bret Parker is taking part in one such study for Parkinson’s disease. He’s 46 years old, lives in New York City and has blogged about his illness. “When I heard there was a trial that involved a wearable that would help me better manage my symptoms and my condition, I said to myself, ‘Well, that’s a pretty cool thing. I’ve got to try that.’ Parker enrolled in a pilot study to see whether an activity tracker made by Intel would be useful to track the severity of his tremors. It creates a digital diary showing how tremors respond to minor changes in diet, sleep patterns or what time of day Parker takes his medication. Parker says in the early stages of his disease, he didn’t pay close attention to those kinds of details. But as the Parkinson’s progresses, he believes he’ll have to change his approach. “This is going to be a battle between me and Parkinson’s in the years to come,” he says. “As it advances, it means I’ve got to be better and smarter at my role in it. He hopes the wearable will help him do that.”

This Patient makes a great contribution to helping raise awareness of the needs that the tracking market must focus on and I think it’s this paradigm shift towards self care that the Healthcare industry needs to wake up to eg. the wearable market is very quickly maturing and any Doctors who understand it aren’t going to be trying to service these opportunities with bricks and mortar office visits.

For insights into the leading examples of mHealth being put to use in Clinical Trials be sure to follow the developments announced with the Mobile Clinical Trials Congress that I’ll be presenting at in Edinburgh, March 24-25 2015.