“When elephants fight, it is the grass that suffers”

First we had the fall out over patents between Nokia and Apple that left the recently acquired Withings losing distribution with it’s biggest and most important channel to market and now we have the world’s biggest corporation (Apple) going to battle with Qualcomm – probably the world’s biggest corporate backer of mHealth startups through it’s QualcommLife venture (at one stage with Donald Jones at the helm they even tried to spin off LifeComm – a $100M mobile network exclusively focused on serving the healthcare industry). (Financial disclosure: Qualcomm have been generous financial supporters of practically every mHealth event we’ve ever run going back to 2009).

The jury is out on what this might mean for the relationship that QualcommLife companies have with Apple (although it’s probably not going to be anywhere near as drastic as was seen with Withings as Qualcomm is not the parent company but is typically investing in these firms as no more than an equal footing as other investors) but perhaps the lesson for mHealth firms considering investment from a mobile giant in these troubled times is to stay independent from any one in particular as your revenues are going to seem inconsequential in the battle for leadership in the newest Trillion dollar industry?

Learn everything you need to know about the Mobile Industry by ordering the $10 Tomi Ahonen Almanac. 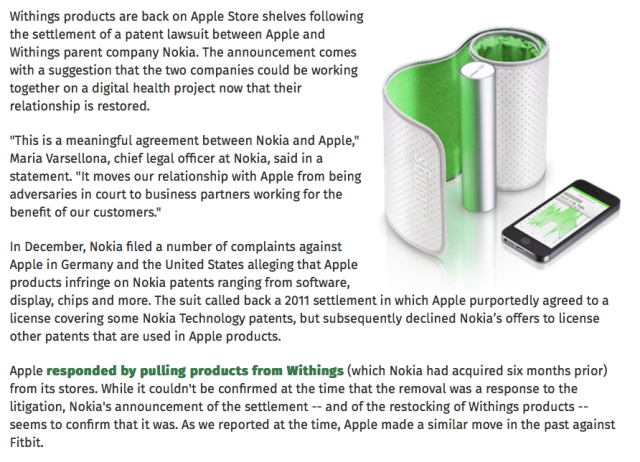