NBC News: How smartphones could become our guardian angels 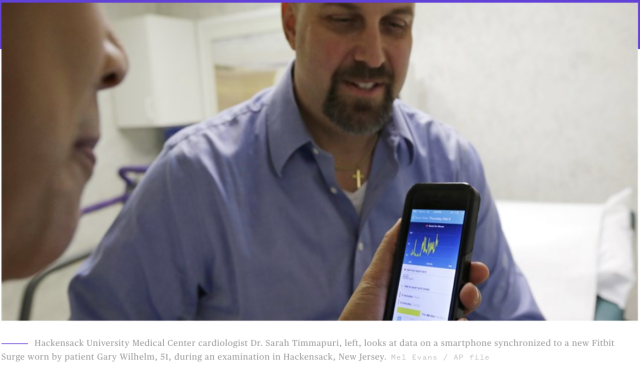 A fascinating article by Edd Gent: How smartphones could become our guardian angels (2 Jan 2018).

Soon? We’re already ignoring the data eg. Samsung’s smart scroll app has probably scanned more than 100 million retinas, the photos app on every iPhone knows exactly how many selfies users are taking but few Doctors ever discover this information, etc.

“Smartphones can be literal lifesavers, but they’ve also been linked to health problems including depression and sleep disruption”

Okay I wrote this in 2009 but it still surprises me that so many people think we’re still weighing up the pros and cons of mobiles. Surely in 2018 the balance has well and truly swung towards everyone recognising that mobiles have made a huge positive contribution to our health and well-being?

“They’re a very good proxy for capturing how we interact with our environment and other people,” Dr. John Torous, co-director of the digital psychiatry program at Beth Israel Deaconess Medical Center in Boston, says of smartphones. “Things like how active people are, how much people are sleeping, how far people are traveling each day. That basic health information is important across anything from just general wellness to heart conditions to mental health conditions to diabetes.”

I think society is gradually realising that most Doctors today are having little more than encounters with strangers so it doesn’t surprise me that Dr Torous thinks mobiles can only manage to provide a ‘very good proxy’. Aren’t we all now aware that we’re probably being more honest with our mobiles than even ourselves?

As a side note I don’t blame medics for holding their traditional views (even in the world’s best medical schools the students of tomorrow still aren’t getting proper training to use these incredibly powerful always carried supercomputers) but find it’s an eye opener when they get to appreciate the spyware that is already loaded on millions of smartphones:

“Researchers at the University of Michigan have built a smartphone app that monitors the voices of bipolar disorder patients to detect mood swings. Loud or rapid speech can be indicative of mania, while long pauses between utterances can suggest depression. The Michigan researchers hope the app will eventually be able to predict mood swings and then notify the user and his/her doctors that an episode may be imminent.”

I think this really highlights the need for Patients and their Carers to be in much more control of data as the reality is speech monitoring tech like this is not yet being used for medical value but is already being used at scale by others eg. to get an idea look to China where huge volumes of  personal mobile data is being mined by financial services companies to make millions of credit decisions.

It shouldn’t be hard to imagine that there are unscrupulous advertisers taking advantage of data that indicates mood swings to push more credit at vulnerable customers at the optimum time but I think most people who will ever read this are probably far too decent to even begin imagining what gambling, drug selling and outright scam websites are already busy with.

“Academic researchers aren’t the only ones looking for ways to harness smartphone data for better health. Mindstrong, a startup in Palo Alto, California, is testing an app that collects location, activity, and social interaction data as well as keyboard use and even word choice. The hope is that the app will be able to help detect various mental illnesses; unusually slow typing or misspellings could indicate cognitive impairment, while certain language patterns — frequent use of the word “I,” for instance — might mean depression”

Isn’t it becoming obvious that Facebook already knows this type of information and is selling it to advertisers?

“Chicago-based Triggr Health is already selling an addiction recovery app that it says can tell when users are likely to relapse. It relies on smartphone data as well as drug use history and other personal information. When the app spots a potential relapse, a member of the company’s chat support team steps in to offer advice or alert the individual’s real-world care team”

I think it’s interesting to note that already with all your location data a lot of mobile apps already know more than the Trigger Health app will ever know eg. they know when you’re visiting a pharmacy or a neighbourhood where drugs are being traded.

“NOT READY FOR PRIME TIME? For all the promise of smartphone health data, there’s scant evidence proving its effectiveness in the real world. Then there’s the matter of privacy. “People may be surprised to find that personal data entered into a mental health app is forever out of their control,” says Torous”

I sense I might be in a growing minority but I’d much prefer the situation where information that I gave to an app that I wrongly entrusted is misused than information about me that I can never access in the first place is being traded by healthcare organsations that I pay for via taxation with data trading corporations  I never even know about.

“Reliability is another concern. Little says insufficiently tested services could wind up diagnosing people with problems they don’t have. That could cause needless distress and waste doctors’ time. “Human behavior is infinitely complex,” Little says. “Trying to measure a hand tremor from a smartphone is great until you realize someone’s using a lawnmower.”

I think this basic issue is overcome when we just realise we need to combine mHealth sensor data with clinically validated medical history taking questionnaires and then using that data to tweak the algorithms so that when hand tremors are detected in future the microphone & gyro turn on to discount the finding if there is also a vibrating engine detected.

“RUNNING IN THE BACKGROUND. At present, Little says the most reliable disease monitoring systems involve the use of so-called “structured” tests, in which people carrying smartphones perform certain specific tasks. For instance, researchers might ask an individual to walk 20 steps to generate movement data, which is then analyzed — or to repeat a specific sentence so the same can be done with voice data”

I’d disagree with this conclusion but perhaps it’s my familiarity with the use of sleep monitoring apps like SleepTracker.