There’s no livestream from #HIMSS18 but in a classic example of what happens when you let pesky Patients come along to medical conferences: they point their mobile at the presenter, video what they see and share it.

Apple Health is being presented at a Healthcare conference.

I know it’s becoming a thing for Apple to talk at external conferences but it’s still very rare for their executives to present at a conference that isn’t organised by Apple Inc. particularly on such a low key stage (why didn’t HIMSS schedule this as a keynote talk in the main ballroom or as a fireside with Hal Wolf??).

“we’re very excited about this but it’s a first step and we think it’s very important to engage the ecosystem and we’re very excited about the response that we’ve got to see other EHR vendors and other healthcare systems come onboard and work with a standards based approach supporting the architectural implementation guide, and we’re also interested in doing a lot more and becoming and so shameless plug at the recruiting fair tomorrow we have a booth if you’re interested in learning more about what we do and possibly exploring job opportunities there feel free to stop by…”.

It would’ve been great to see this talk live streamed on Apple’s website (as they do with normal Apple product launches/presentations) particularly given that Apple are wanting transparency in all they do in healthcare and welcoming feedback (they are after all dealing here with people’s most private information).

“We announced this in January with 12 health systems and we now have over twice that listed and this list is growing quickly and the feedback that we have gotten since we announced this has been phenomenal.  People are really excited to be a part of this because they want to empower consumers with their health information”

Although I’m surprised to hear Apple referring to ‘Patients’ as ‘Consumers’ (as this could become very problematic down the road) it should be obvious that EHR Provider valuations are going to fall off a cliff when their investors see that this hasn’t just happened but it’s getting substantial traction.

“Consumers might not always know the branded name of a health system that they went to, they might just remember the location so (we made it possible to search via location)”

This must be quite awkward for the marketing teams at the big healthcare provider brands that are already involved. It’s obviously true but I’m surprised Apple isn’t feigning a little to them to let them think their brands have some value in the eyes of Patients (until they’re at least a little further down the road with this). 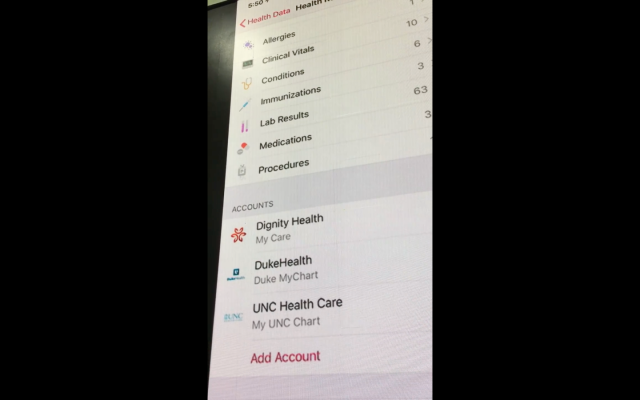 That screenshot says 1000 words. I better get working on an update to the mHealth course that I produce for the Computer Society. How long before Patients are expected to share their record with their Doctor (instead of the other way around)?

I think my new module will be titled something catchy like: “Can you airdrop me a copy of that please?”.

It’s great that there’s a 37 year old Doctor giving this demo but it’s surprising that they haven’t got a more experienced clinician (perhaps a Family Doctor – and yes I know they’re like hens teeth in the USA) but Ricky has all the right credentials to help Apple disrupt the EHR market with a MobileFirst approach eg. prior to working for Apple on the HealthKit ResearchKit and Health Record products he was Director of Mobile Strategy at Duke University Health System and he used to blog as “The Mobile Doc” and he’s active on Twitter too @RickyBloomfield:

NOTE: Katie McMillan at Duke Mobile App Gateway has authored a useful guide to getting started with Apple Health Record:

Apple’s Health Records App: a ripple or a roar