Did the NFC technology focus cause Samsung to miss out on the biggest ever TV opportunity for mHealth?

Stats shared on the blog of UK 3G Mobile Operator “Three” confirm how the Olympics led to a spike in fitness related mobile web traffic.

> During the opening ceremony streaming video via BBC iPlayer increased by 167%
> On the first Saturday of the games related traffic increased (by 347% and 172% to London2012.com and GetaheadoftheGames.com websites)
> A week into the Games traffic to the mobile website of Fitness First (a popular UK gym chain) increased by 144%
> On the day that Jessica Ennis claimed her heptathlon gold medal the WeightWatchers mobile website received a 57% increase in visitors

Positive news but can we have some more data please

It always amazes me that telco’s are so slow to realise the potential that simple data sets that they can easily gather have to drive awareness of and innovation in allied industries where there are opportunities for them to add value. Even if the data seems useless it’s still key to business adoption of mobile and it surprises me that organisations like the Mobile Data Association don’t do more to educate the telcos on the opportunity releasing such data can have in driving the mobile data opportunity.

Rather than announcing findings that are rather meaningless (eg. in this case would is it surprising that there is an increase in TV viewing when the biggest ever televised event is showing when you compare it to a normal Saturday evening in July?, when else would you expect visitor numbers to peak for a website like London2012.com?, etc) I think telcos should be looking to get more data out there so that those with industry specific insights can draw out more interesting stories.

As a good example of the type of insights that can be seen by others check out this post where I highlight how one single call volume data point from 2005 revealed the existence of a multimillion mHealth VAS opportunity that required no investment and could be developed substantially – sadly a simple opportunity that even 7 years later no British mobile operator has yet woken up to. Similarly can you imagine if a big telco could just reveal how many million visitors to healthcare or GP websites had a poor experience because the site wasn’t mobile optimised? How many calls a GP clinic receives before and after implementing a SMS gateway so patients can text in? Perhaps I’m wrong (again!) but I think it’s showing people the missed opportunity that helps drive changes quicker.

Data that mobile operators can help the mHealth market with:

Did Samsung’s NFC focus cause it to miss out on the mHealth opportunities?

While the Olympics coincided with Samsung’s mHealth strategy announcement it’s quite obvious that it was a case of too little too late and from someone watching the proceedings it was greatly overshadowed by the focus on a NFC tech that the Samsung Galaxy S3 features that was being showcased with the very unpopular and inconvenient Visa-only NFC payment terminals in the Olympic village and retail stores.

Evidence for the lack of engagement Samsung achieved can be found by reading the BBC News Business article on “The corporate Olympic champions” that highlights the lack of recall of the Samsung brand that resulted from it’s association with the promotion of a NFC payment technology (that’s apparently going to be big some time in the future) from fellow sponsor VISA. It also points to the successful low cost promotion of the “Beats by Dr Dre” headsets (this is a company that was until recently majority owned by HTC, Samsung’s struggling Taiwanese competitor).

My biggest bug bear is that in the vast majority of the NFC use cases being shown it’s all about the technology which I argue is never a good idea way of communicating value to customers and the mobile is normally just used as a dumb token – something that can be achieved via cheaper and easier to implement means eg. on screen ticket codes, Apples PassBook application, etc.

I’m left with the feeling that whilst Samsung no doubt generated increased awareness of it’s brand that will have a knock on effect on sales it’s probably not what’s needed when you have as many opportunities to engage with audiences because you’re the worlds biggest mobile and smartphone device maker. There is no doubt in anyones mind that Samsung has a portfolio filled with the best mobile phones on the market and a global distribution network that is now unrivalled – for evidence go out and try to buy a Smartphone in the UK today and you’ll be hard pressed to find store staff who want to sell you any other brand.

In my opinion Samsung doesn’t need to wave flags, employ women to shake pom-poms, tell us it’s “designed for humans” or that it’s “inspired by nature” it needs to start up selling us on Olympic branded accessories for our new mobiles that can bring desirability to health monitoring through association with athletic achievement and optimal performance (rather than poor health – the unfortunate focus of most healthcare systems).

Imagine the potential for a “Going for Gold” package featuring a connected weigh scale and a night stand that included a charger, sound system, blood pressure monitoring cuff, sleep monitoring tech and sleep coaching/alarm apps, and all bundled into a S Health branded HealthVault account so this data can be used to add value: 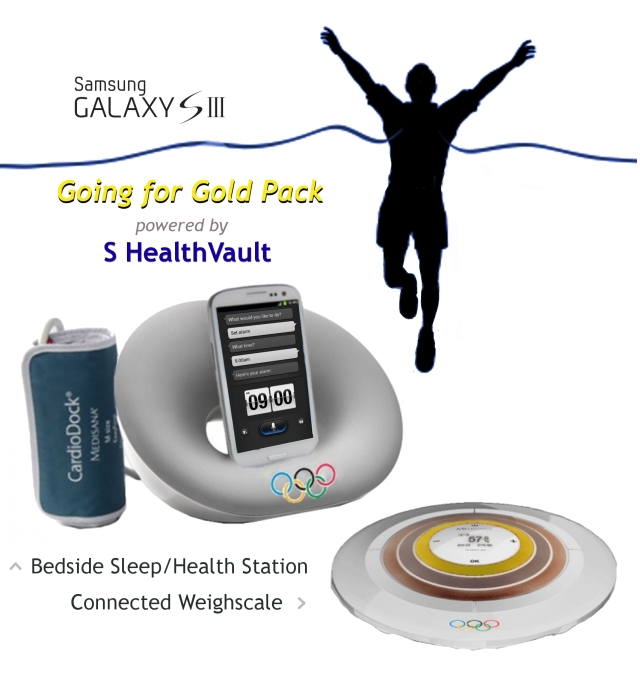