Patient Safety: Why we need to provide Patients with documented consultations 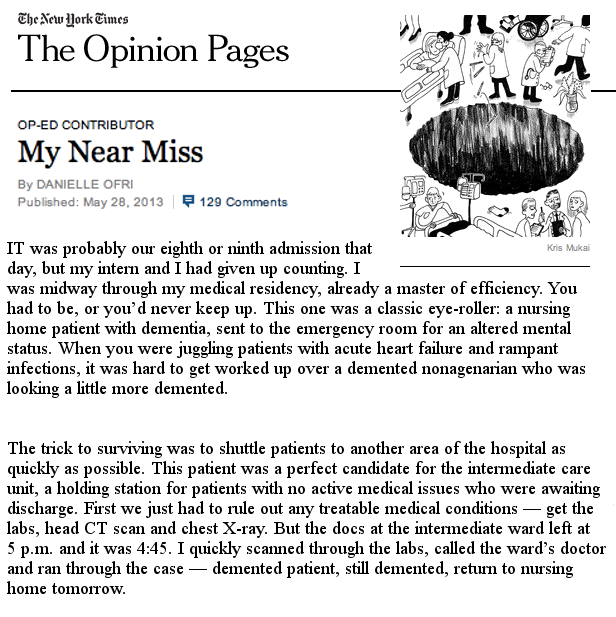 This excellent “My Near Miss” article by Dr Danielle Ofri in the Opinion Pages of the New York Times leaves readers with the suggestion that “Until we attend to the culture of shame that surrounds medical error, we will be only nipping at the edges of one of the greatest threats to our patients’ health“.

Unfortunately while I’m sure there would be great insights to be had from stories about “how a person in authority handled the emotional fallout and the feelings of incompetence” I think there are some deep seated cultural challenges that will ensure that this problem will not simply disappear if we simply have “the chief of medicine or the director of nursing stands up and talks about his or her biggest medical error” because the example that we will be told about will be a self selected error and we’ll still be pandering to this concept that you can categorise clinical practice as either correct or at fault.

For me the most revealing line in the article is where Dr Ofri explains that “I never told anyone about my lapse — not my intern, not my attending physician, certainly not the patient’s family“.

In 2013 it should be really be obvious to anyone involved in the healthcare industry but imagine if we put the patient and their family at the centre of the medical documentation process? Went with the (some might think it crazy!) idea of making a Patients medical records theirs. Wouldn’t all the other problems that Dr Ofri encountered quickly fix themselves eg. you’d be quick to tell your intern and your attending physician just incase the Patient’s family notice it, you’d be more honest about your mistakes because they were documented, you wouldn’t need to be spending days of the valuable time you could be spending caring for Patients having your clinical skills assessed because reviewers could just open a document to review your work, you’d be more enthusiastic about using tools that could help you avoid errors in future, etc.

Of course once healthcare is all documented decision support tools can be provided to help Medical Residents (who as a result of working hour directives etc are now getting less opportunity to meet “classic eye-roller’s” on which to master those important skills of efficiency) so that when they are approaching the end of their shift and meeting with their first nursing home Patient with dementia who’s been sent to the ER with symptoms of altered mental status the Medical Resident caring for them will be specifically asked “Did you check the head CT for an intracranial bleed?”

It fascinates me that Amazon uses technology like this to make sure we don’t buy a battery powered toy without picking up some batteries, or to recommend another book that we might be interested in… 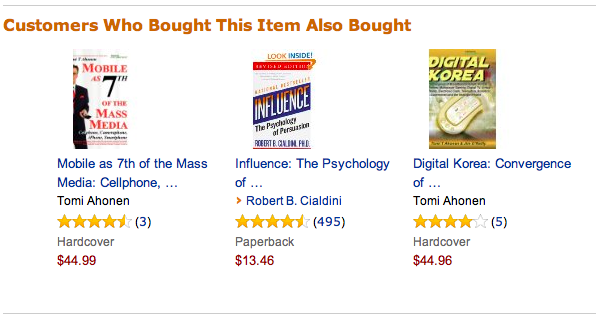 Michael Seres shares an experience that has left him questioning if sharing feedback with his Carers is always a good idea that I think highlights what happens when Patients become aware of how the culture of shame that surrounds medical error harms the relationships they have with Professional Carers:

“It was during an iron infusion that I learnt something that has really knocked me for six…. …A couple of months earlier I had attended a routine multi disciplinary meeting, which had gone really well. I then received a letter summarising the meeting. Unfortunately the letter contained many inconsistencies. In my opinion it did not accurately reflect the meeting I was in. So I wrote back. I detailed the points that I felt were incorrect and asked for my notes to reflect the changes I had outlined. A few weeks later I received a letter of apology and confirmation that this was being done. End of story as far as I was concerned. Except it wasn’t. Whilst having my infusion I discovered that my letter had been treated as if I was making a formal complaint and I had been marked as a “troublesome” patient… …However learning about this sordid saga that was happening behind the scenes has really saddened me. To my face people have remained no different. I, in turn, have remained the same, oblivious to what has been going on behind the scenes. Now my sadness has turned to anger. It has led me to ask the question whether being engaged and informed is actually sometimes a disadvantage? …Time and again I have stood at conference and written posts explaining that it takes great bravery for healthcare professionals to engage. I have said and written this with the knowledge that my own team have been the bravest. Now that has changed. Some have chosen to disengage with me because I have dared to ask a question, dared to respond to a letter. Why? What threat am I? I am just a patient no different to any other, trying to manage multiple complex conditions. The question I ask you is this. What did I do wrong?”

Related Post: “Can we talk about this?” is a simple litmus test for a productive relationship.

1 Response to Patient Safety: Why we need to provide Patients with documented consultations