Alex Gourlay, President of Walgreens Company (the world’s biggest drug retailer with more than 8200 stores in the US alone and 4,500 more that are branded as Boots in Europe) opened the HIMSS 2015 Conference in Chicago (the world’s biggest Healthcare IT Conference attended by 40,000 delegates) by sharing his vision of how the company will use Mobile Video calls with Doctors to teleprescribe antibiotics.

Join us at HIMSS tomorrow from 4-6pm for the mHealth networking group meetup.

UPDATE 14 April 2015: Alex also talked about the medication reminder app that Walgreens have developed for the Apple Watch. On sale from Friday there have already been 1 million customers paying for this new health sensing wearable. Android Wear SmartWatches’ have been around a while but the Care/Protection packages that Apple will sell to Watch customers will probably be the second biggest revenue generator in the Watch market until Apple takes things up to another level with a disruptive ‘hearable’.

We now live in a time when the world’s best developers are working on the latest devices to put out mHealth apps for us to evaluate and rate, can you begin to imagine the impact this will have on the clinical trial market in the next few years? 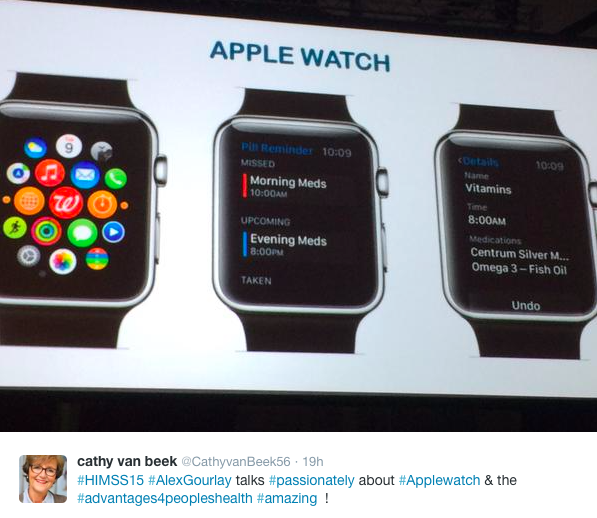 (HatTip: Cathy Van Beek who took a much better picture than my colleague in the audience who was recording it on video)