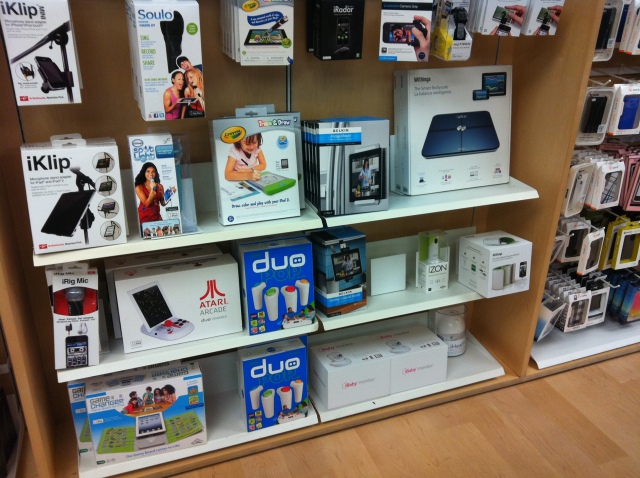 I’m fascinated by the email and off line responses I got to a recent post on the mHealth sales successes in the flagship Apple stores in California.

Everyone seemed interested in what Apple’s next move might be. I’m worried that by talking about the what’s potentially next we run the risk of carpeting over the phenomenal step changes that Apple have already made in retailing mHealth devices (they sold more devices at a higher ARPU in 1 day trading than the mHealth team at Orange Austria managed in 6 months despite their very high profile partners).

So I thought it would be worthwhile elaborating on what has already been executed on. I hope this will help more marketers and retailers appreciate the existing opportunities we have right now to make money retailing mHealth products and services. More over I hope it’ll encourage them to do something by instilling a bit of fear that if they don’t act now someone else is probably going to eat their future lunch.

In addition to the device testing that I’m now conducting, here’s a few of the things I found particularly interesting about Apples approach to mHealth retail:

BE THE EARLY ADOPTER AND LET EVERYONE KNOW ABOUT IT 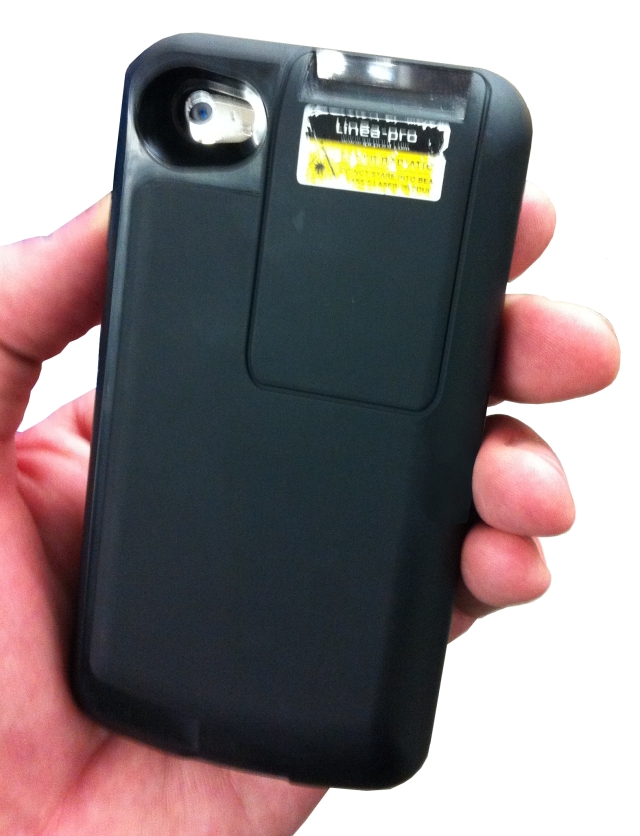 So often I go into a mobile retail store and see the whole Point of Sale technology running on PC’s or worse still paper based records. I think from this standpoint it’s almost impossible to try and convince other businesses to consider that you or the mobile technology you offer is ready to transform their business.

Apple’s use of the LightSpeed point of sale system (from Xsilva) is a great example of this execution. Each and every business person who ever buys anything in an Apple store gets to experience this new level of convenience and ease of use and inevitably the smart ones are asking “how can I get that?”

Offering a Lite alternative for immediate sale is also a no brainer. I wonder how many business owners are returning from a visit to the Apple Store and placing a Square Card Reader on the desk of their IT Director and asking her to get a modern POS system in place?

I’ve noticed the lack of adoption by mobile brands is an area that really embarrasses the mHealth sales staff when they’re out selling their cool-aid to prospects in the healthcare sector. Inevitably the conversation comes around to “so what advanced systems does your firm use for employee health and wellbeing?” when you can almost hear the tumbleweed passing by as they explain their plans to finally move beyond paper based records…

LET CUSTOMERS GET HANDS ON 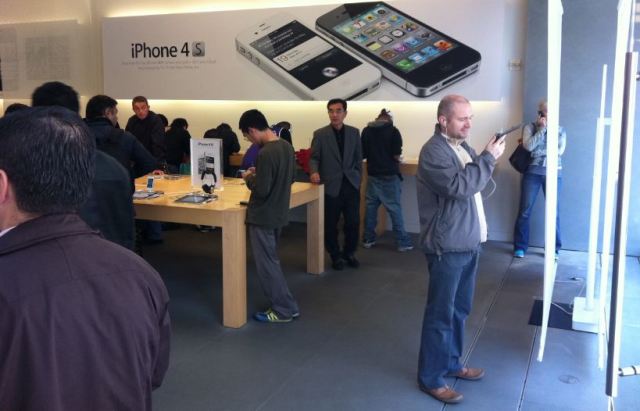 It amazes me in 2011 that anyone thinks the way to sell mobile solutions is via dummy plastic devices. No mobile phone retailer has gone to the wall because it gave away some free WiFi coverage, but looking around and you’ll find retail stores selling the exact same product from a store that exists in a wireless blackhole and is lucky to even have plastic dummy’s on display:

Really you sometimes ask yourself how rubbish like this could get signed off on. In sharp contrast Apple employees have all the relevant apps on their phones, a Withings Scale in the staff room and several of them have their wrists adorned with the colorful JawBone activity monitors.

I think it’s safe to say this really doesn’t need an explanation to readers of this blog.

Of course Apple has faced criticism about the design of it’s products from inclusive design thought leaders but it’s clear to me that Apple has taken a very different approach to what it means to be inclusive.

In it’s approach to mobile phone sales Apple has a similarly unique style and this can be evidenced all over the stores. A good example I evidenced was that one of their leading in store salesmen was visually impaired. Here he is sorting out a technical problem for a Space X scientist…

Unsurprisingly this guy is an incredible mobilist and it reminded me of when I hear “UX gurus” talking about “Heads Up user experiences, blah, blah, blah”. I just can’t help but think instead of paying for so many expensive consultants just pay a guy like this to completely design your next mobile and you’ll have a global hit on your hands.

But the amazing thing is most of the UI challenges aren’t rocket science at all. I’m willing to bet that if Nokia or Microsoft was even an inch closer to an appreciation of real world customers needs there isn’t a hope in hell that the latest Lumia Smartphone would be shipping with a SIM Card holder and microUSB power cover that challenge the dexterity of a watch maker and rule out the device as an option for 90% of manual workers and seniors. 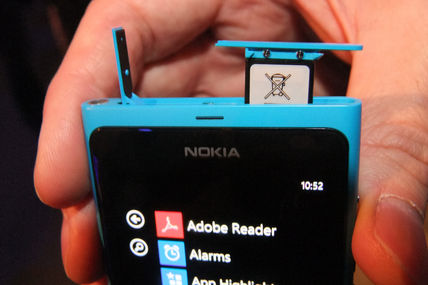 I’m amazed Apple isn’t yet commercializing this kiosk casing modification that enables the device to elegantly remain encased and powered yet elusive to damage/theft:

As you can see everywhere you look the kiosk market loves the iPad, is crying out to share in such simplicity and would no doubt pay extra for these modified devices.

It’s also likely to grow the size of the market because of course there are lots of unsuccessful kiosk initiatives that have failed to gain traction as a result of incredibly unengaging fixed user experiences:

LACK OF HESITATION, BUT THERE’S STILL LOTS OF ROOM FOR IMPROVEMENT

There are still lots of devices and services that could be introduced but Apple definitely needs to be careful. To illustrate this point consider the iBaby monitor from iBaby Labs Inc (a company that also produces the iHealth Apple iPhone/iPad BP Monitor.

This is one of those mHealth technologies that I personally think will inevitably lead to a class action ligitation against a major mobile brand (like Apple). I’ve always half-joked that there is a business model for a big law firm to fund the start up of consumer baby health monitoring technology so that it can be adopted by one of the big mobile clients that they represent.

To help you appreciate the issues consider the following extract from the Baby Monitor by Withings (a product that is similar to the iBaby Monitor pictured above) FAQ page: 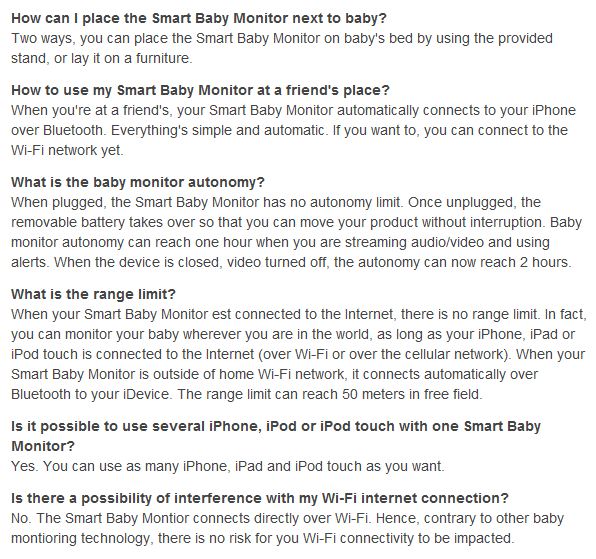 Why do I think this will happen?

> Like it or not the public think powerful radios can cause cancer.

> The packaging of this product suggests long term use beside a baby, even suggesting it should be placed “on” the childs bedding.

> With country wide sales it is very likely that a parent using this device will have a child that is affected by cancer. In all likelihood it will probably have nothing at all to do with the use of this device or the Bluetooth and WiFi radio it can broadcast but I think it’s obvious that the parent might look for answers as to how this could have happened and it’s likely there will be an army of legal experts prepared to represent them.

> It’s also likely that there will be an authoritative medical expert who is prepared to say such a powerful radio used in such proximity to the developing skull of a infant could have resulted in the changes observed in the childs health.

> Every other mother who’s been using this product is going to want to know has the use of this device caused long term effects on their infant. Some of them might also want to recovery the loss they feel they have been subject to.

> There are lots of irrational precedents highlighting unreasonable concerns over wireless transmissions in the USA and elsewhere in the world.

> A company with a consumer brand and $85 billion of cash in its account is likely to either have to face these issues and the potential bad press associated or simply pay for them to go away. If you’re looking to invest in the mHealth space the receipts for an iBaby Monitor from iBaby Labs (an iHealt99 company) or the Smart Baby Monitor by Withings both looks like a good micro-investment…

I can also see several other products that could lead to Apple becoming engulfed in damaging legal actions eg. the $149 PocketFinder device: 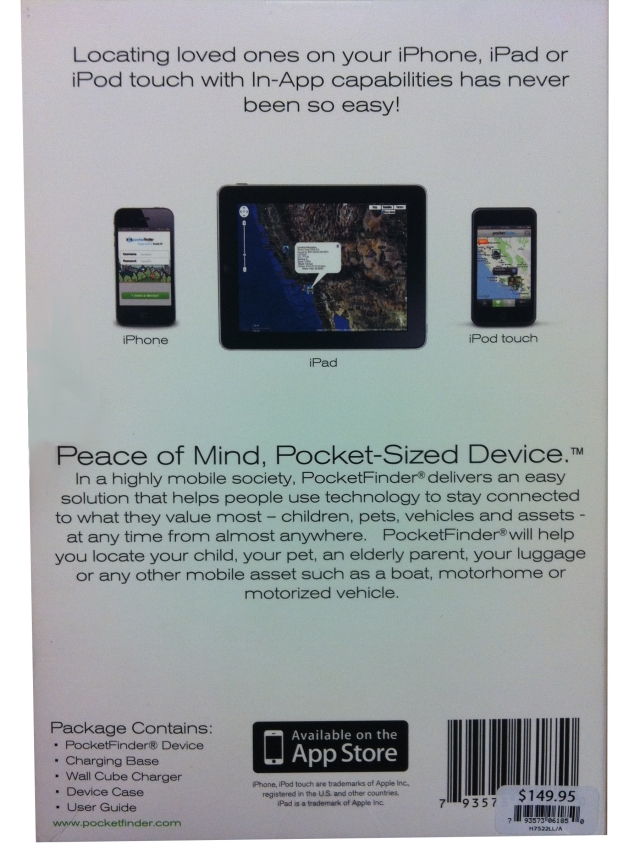 With an offer focused on providing peace of mind:

With promises to help adults “stay connected to children” and “locate children” it’s sad but I can’t help but think that with such reassuring on box claims and website graphics it’s not going to be long before some irresponsible parent is claiming they over relied upon such a device and left a child alone at home, in an untrusted place or failed to recognise an incident because they were misled by the data from the device. From a practical perspective as a safety net against abuse of a child I think putting a PocketFinder into their clothing is going to be of limited value (the majority of abuse is committed by someone the child knows or trusts and would be likely to know of the devices presence).

It’s going to get exciting as the installed base grows and patients begin to demand the opportunity to connect these devices with their health information. Maybe Apple will have to work with Microsoft or push out a competitor to HealthVault?